Felipe Drugovich continued his rich run of form in Jeddah as he managed to snatch pole position in the last seconds of a manic Qualifying session.

In a session that included three red flags and multiple championship contenders hitting trouble, it was Drugovich who timed his final run to perfection to wrap up his second Formula 2 pole position and his first for over two years, with Bahrain Sprint race winner Richard Verschoor also nailing his final run as he secured second on the grid for Trident.

As the sun began to set on Jeddah, today’s Qualifying session promised to be tricky for the drivers after their running was heavily interrupted in Practice.

Championship leader Theo Pourchaire would start the session despite his Practice crash which gave his ART mechanics plenty of work to do over the break.

Series rookie Cem Bölükbasi wouldn’t be so lucky as he was ruled out of the session after being taken to hospital for medical checks after suffering a heavy shunt in Practice.

20 of the 22 starters left the pitlane to begin their reconnaissance laps shortly after the session’s commencement, with only  Drugovich and Bölükbasi the only two not to go out straight away.

Campos’s Ralph Boschung set the early pace with the Swiss veteran setting a 1:42.096 to go top of the timesheets with Jake Hughes second but over four-tenths down.

Drugovich’s first quick run on a clear track saw him move up to second with a 1:42.386, with Ayumu Iwasa also improving to third on his next fast lap.

Hughes fought back on his second fast lap as he narrowly pipped Boschung for provisional pole with a 1:41.538, under a tenth quicker than Boschung and over two tenths faster than Jüri Vips.

Pourchaire’s dismal weekend took a dramatic turn for the worse after an engine fire forced the championship leader to park his smoking ART and end his Qualifying early. The red flag was brought out to give the marshals time to remove the Frenchman’s car.

After a short break to remove the stricken ART, the session was restarted with just over 18 minutes on the clock.

At the halfway point in Qualifying, Hughes remained on provisional pole ahead of Boschung and Vips, with Marcus Armstrong fourth ahead of Drugovich and Iwasa.

But just as it seemed that Boschung was set to reclaim provisional pole with the fastest first and second sectors, Logan Sargeant whacked the wall at Turn 17, bringing out the red flags for the second time in the session as the American trundled into the medical car.

With over 12 minutes left until the chequered flag dropped on Qualifying, the session resumed as messers Boschung and Hughes bolted out of the pits, whilst Armstrong and Jack Doohan nearly came together in the pits, much to the Australian’s annoyance.

Not that incident flustered the Kiwi too much as he moved onto provisional pole with a 1:41.050 over a tenth faster than Iwasa in second.

Boschung’s hopes of retaking provisional pole increased as he went fastest in sectors one and improved in second two before losing time in the final sector after Frederik Vesti nearly collided with the Swiss veteran at the final corner costing him provisional pole and earning the Dane a trip to the stewards.

The red flag was waved for the third time in Qualifying with just under five minutes left to go in the session,  as the medical car went around for a lap to seemingly inspect the condition of the circuit.

At the restart, only a select group of cars left the pits to try and improve their grid positions, with Boschung and Armstrong out of the cars as they watched the rest of the session from the pit wall.

But the pair were forced to watch on as Drugovich snatched pole in the session’s closing stages, with Verschoor also finding time on his last quick run to bump the Kiwi off the front row.

Doohan also improved on his last run as he moved up to third, consigning Armstrong to fourth and Boschung to fifth, with Lawson sixth ahead of Iwasa and Calan Williams.

Vips could only manage ninth ahead of Hughes, who held the provisional pole for some time. Championship leader Pourchaire would start both races from 21st on the grid. 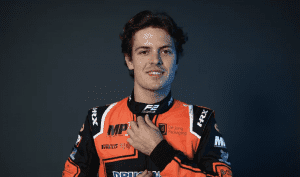