With unusually cool and overcast weather and a mixed-up grid which saw championship leader Schumacher start tenth and championship chaser Ilott on pole, all the ingredients were ready for an exciting race.

At the start pole sitter, Ilott ran deep into Turn 1, handing the lead to Drugovich.

Championship leader Schumacher made another of his lightning starts, going from tenth to fifth. Soon after he made contact while overtaking Guanyu Zhou, damaging the Chinese driver’s front wing.

Schumacher next target was Marcus Armstrong and the German snatched third after passing the Kiwi down the front straight on lap two but he was unable to hold the position as Armstrong retook the position on the exit of Turn 5.

Armstrong gave Ilott a further headache by passing the Brit for second place on the run into Turn 4 pushing the Brit into the clutches of Schumacher.

Schumacher got the move completed into turn one going straight past Ilott in the run into turn one as the Brit’s tyres began to fall apart.

The German then moved up to second courtesy of a scruffy sector from Armstrong.

Ilott finally came into the pits on Lap 13 to put on the hard tyres, but suffered from a slow stop.

Yuki Tsunoda continued his charge from last on the grid, moving into the points scoring positions by passing Louis Deletraz for tenth.

Race leader Drugovich finally made his mandatory pitstop on Lap 16 with MP producing a good stop to put the Brazilian ahead of Ilott and in the net race lead.

But Drugovich suffered two lockups on his first lap on fresh rubber giving Ilott the position back on the exit of Turn 10.

Schumacher started his charge through the order by passing teammate Shwartzman for fifth on the main straight courtesy of DRS. Soon after he caught and duly passed Armstrong for P4.

In the battle for third Schumacher tried everything he could to get past Daruvala but the Indian held off his charges.

But no one could catch Drugovich who took his third win of the season ahead of Ilott and Daruvala, who took his maiden Formula 2 podium with Schumacher fourth from tenth on the grid.

Mazepin was fifth ahead of Tsunoda in sixth, Armstrong was seventh ahead of Shwartzman and Dan Ticktum with Jack Aitken rounding off the top ten.

As a result of today’s result, Ilott closed the gap at the top from 18 points to 12 points whilst Tsunoda maintained his third place in the championship coming into tomorrow’s sprint race. 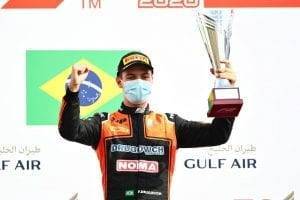