Felipe Drugovich took his first victory of the season in the FIA Formula 2 Feature Race in Jeddah, surviving a late charge from Richard Verschoor with Jehan Daruvala rounding off the podium in a superb run from P14.

Drugovich grabbed the championship lead after both Théo Pourchaire, and Liam Lawson retired in a disappointing weekend for the Formula 1 juniors and championship hopefuls.

There was drama before the race as the start was aborted and the drivers began a second formation lap, but Drugovich kept his cool on the second attempt and led the field out off the line with a superb start.

The MP Motorsport driver chopped across Verschoor once the lights went out in a very aggressive move in the run down Turn 1 to keep the lead.

New Zealander Marcus Armstrong kept hold of third place as he looked to make amends after a disappointing Sprint Race.

Reigning FIA F3 champion Dennis Hauger made a great start gaining two places on Lap 1 as he attempted to make the alternate strategy work – the PREMA rookie started on the slightly more durable medium compound tyres instead of the soft.

Ayumu Iwasa swept past Jüri Vips three laps into the race, snatching P6 from the Hitech driver as Drugovich continued to lead ahead of Verschoor and Lawson.

The Japanese driver eventually also got past Boschung on Lap 5 after Boschung went off the track at Turn 1 with Vips in close proximity. The stewards promptly handed the Campos driver a five-second penalty for going off the track and gaining an advantage.

Daruvala took the opportunity to pit for medium tyres on Lap 7, while team mate Hauger got past Boschung as his medium tyres came alive to make the alternate strategy work.

After an electric first lap, moving up to 13th place from the back row, Pourchaire’s frustrating weekend continued when electrical issues heaped more misery on him, forcing him to retire from the race.

The only challenge to the Drugovich’s lead came when he boxed for medium tyres allowing Verschoor to attempt the overcut one lap later, but the Dutchman rejoined behind his rival with ten laps down.

With all the leaders now having stopped, Hauger inherited the lead for PREMA as he tried to lengthen his opening stint to go as long into the 27 lap race as possible.

After his pit stop, Sprint Race winner Lawson retired with a loose wheel – the third such incident in F2 in the opening two Feature Races. A bitter end for the Carlin driver who performed superbly over the weekend.

Jack Doohan battled with Clement Novalak for second place as they pressed on with the alternate strategy, with the Virtuosi Racing driver muscling his way past at Turn 1 in a crucial move for his race.

Novalak dove into the pits for the much grippier soft tyres at the end of Lap 18 to come out in P15, but with the advantage over the medium tyre-runners around him.

Temporary leader Hauger finally pitted on Lap 23 for his soft tyres as the PREMA mechanics performed an excellent stop that saw the Norwegian rejoin in eighth place.

With the race settling down and a rare F2 session in Saudi Arabia coming to a close without a safety car or red flag, the leading trio of Drugovich, Verschoor, and Daruvala following the Indian’s brilliant recovery drive were unopposed in their drive to the podium.

Jake Hughes bounced back brilliantly after getting disqualified from Race 1 to sit in P4 for Van Amersfoort Racing.

Drugovich continued to lead the race in an absolutely flawless drive to deservedly win the Feature race in Jeddah.

The MP Motorsport driver now leads the F2 championship after two rounds as the series takes a short break before heading to Imola in late April. 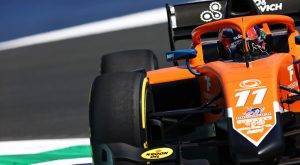