Championship leader Felipe Drugovich took his fourth FIA Formula 2 pole position of 2022 as his closest title rival Théo Pourchaire crashed out of Qualifying for Round 12 in Zandvoort.

The Brazilian’s lap also gave MP Motorsport a home pole position as the 22-year-old edged out Jack Doohan, who had topped Practice, by two-tenths of a second.

The Dutch team will start both races from pole this weekend after Clement Novalak qualified 10th and will thus start at the front for the Sprint Race.

A sensational lap from Drugovich, with the fastest first and final sector times, adds two more points to his total, growing his lead over Pourchaire to 45-points.

Pourchaire crashed out 10 minutes into the session and will start 16th in both races in the Netherlands this weekend.

Having topped Practice, Doohan appeared again to be the man to beat, with Iwasa once more his closest challenger.

But then the session was red-flagged for Pourchaire’s crash, the Frenchman losing control of his ART at the banked Turn 3.

On the second set of soft tyres, Drugovich produced a lap worthy of a champion, putting half a second between himself and Sargeant, who had edged Doohan’s initial benchmark.

Doohan managed to get within three-tenths of the Brazilian but the final efforts were littered with errors and slower sector times, before Jehan Daruvala spun his PREMA at Turn 7, which brought the session to a stop again.

Despite nearly four-minutes remaining, many drivers felt everything had been taken from the tyres and those who did venture out, failed to improve.

Drugovich has a commanding position in the championship now, with another Feature Race podium looking highly likely, while Pourchaire faces a mammoth task on a circuit that many feel will be tough for overtaking. 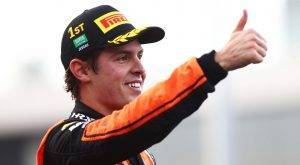