Felipe Drugovich took a superb victory in the Formula 2 Sprint Race in a race dominated by tyre wear.

The Brazilian led every lap and had a quiet morning in Spain whilst the rest of the field struggled.

Luca Ghiotto and Mick Schumacher joined Drugovich on the podium as the championship leaders struggled.

Polesitter Ghiotto got a slow start and was passed by Drugovich on the run into Turn 1.

Schumacher got a good initial getaway and looked to challenge the front two, but Ilott came from way back to snatch P3.

Yesterday’s third-placed driver Guanyu Zhou looked to be under pressure from Robert Shwartzman at Turn 4. However, the Chinese driver got a good exit and counter-attacked, passing Yuki Tsunoda around the outside of Turn 5.

Drugovich extended his lead at the front within a few laps, leading Ghiotto by seven seconds on Lap 12.

Ilott spent the opening laps stalking Ghiotto and went for a move on Lap 14. The UNI-Virtuosi driver went to the outside at Turn 1 but Ghiotto barged him out of the way, holding P2.

The failed overtake allowed Schumacher to close in, but Ilott successfully defended from the German.

As the tyre struggles began, Tsunoda got his revenge on Zhou with an easy move for P5 into Turn 1.

Shwartzman was suffering big time, falling out of the points, pitting on Lap 20 and dropping way down.

His PREMA teammate Schumacher wasn’t suffering as much, finally passing Ilott for third. Ilott dropped further back as Tsunoda followed Schumacher through.

It was double disaster for UNI-Virtuosi as Zhou suffered a puncture, pitting and losing several positions.

Ilott’s tyres were ruined by now and he was easily passed by Nikita Mazepin, Matsushita and Pedro Piquet. Then in the final sector Ilott lost out to Christian Lundgaard, relegating the championship leader to ninth.

However, Lundgaard was penalised for going off the track during the overtake, allowing Ilott to keep P8.

Tsunoda came home fourth ahead of Mazepin, Matsushita and Piquet, who scored his first points in F2. Ilott scored a single point to extend his championship lead, with every point crucial this season. 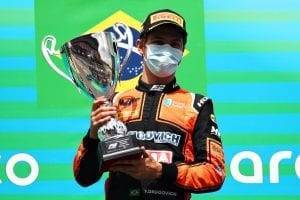