Felipe Drugovich got his weekend off to a good start with the fastest time of a disrupted Practice session in Jeddah.

The only Practice session of the weekend saw the red flag come out twice as rookie Cem Bölükbasi and championship leader Theo Pourchaire find the barriers giving their mechanics plenty of work to do before Qualifying later today.

After over three months away, Formula 2 returned to a revitalised and windy Jeddah Corniche Circuit, with ambient temperatures hitting a baking hot 27 degrees.

At the green light, the field slowly trickled out of the pitlane to begin their reconnaissance laps, with only the two PREMA drivers, Dennis Hauger and Jehan Daruvala, staying in the pits as they waited for the track to clear.

The strong winds had caused a couple of plastic bags to make an unwelcome appearance on the track, with one of the bags landing on Liam Lawson’s car, albeit without any repercussions for the Kiwi.

Van Amersfoort Racing’s Jake Hughes was the first driver to set a relatively quick lap with the Brit setting a 1:51.243, which was quickly beaten by Drugovich, who posted a 1:46.297 to move to the front of the timesheets.

Ralph Boschung, who secured his first Formula 2 podium at this circuit a year ago, moved himself to the front with a 1:45.404, which was then quickly beaten by Drugovich, who moved back to the front of the timesheets with a 1:44.100.

Clement Novalak had a harmless spin at Turn 15, which saw him narrowly miss making contact with the barrier.

Bölükbasi’s first session in Jeddah came to an abrupt end after he clipped the kerb at Turn 11, spinning him into the barrier and damaging the right side of the car with the red flag being brought out for some time as the stricken Charouz was removed from the circuit.

After a lengthy break in proceedings, the session restarted with 13 minutes left on the clock, as the Trident pair of Calan Williams and Richard Verschoor led the entire field sans Bölükbasi back out on the circuit.

Lawson moved from 16th to second on his first quick lap out of the pits with the Carlin driver over a tenth down on Drugovich.

But he was one of the few who could get a fast lap in before the red flag came out again as this time championship leader Pourchaire faced the wrath of the barriers after losing the rear of his ART on a quick lap sending the Frenchman straight into the wall and ending his session early.

With Pourchaire’s wrecked car taking a long time to recover, the session wasn’t restarted, meaning that Drugovich finished Practice fastest ahead of Lawson and Marcus Armstrong with Ayumu Iwasa fourth fastest on his first visit to the Jeddah Corniche Circuit.

Boschung was fifth ahead of Olli Caldwell and Pourchaire, with Novalak, Nissany and Enzo Fittipaldi rounding off the top 10. 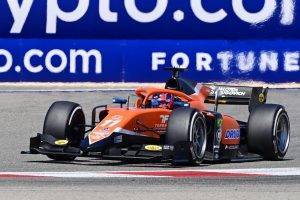