Felipe Drugovich got his Sochi weekend off to a perfect start; after setting the fastest time in Practice as championship leader, Oscar Piastri could only manage 10th.

Drugovich comes into Sochi in ninth place in the championship standings dueled with Campos’s Ralph Boschung for the quickest time in the session, with the Brazilian just pipping the Swiss veteran by 0.021.

The practice began in cold and cloudy conditions, with temperatures hitting a high of 18 degrees as the action began.

The first installation laps were dedicated to checking that all systems were working before switching to the medium tyres as the field prepared to begin their first official lap of the session.

Jehan Daruvala initially set the pace on his preparation lap. The Indian opened up the session with a benchmark time of 2:08.370, which was over a tenth quicker than Guanyu Zhou.

Daruvala’s next run was only good enough for third, as Boschung went quickest with a 1:50.945, with the Swiss veteran setting the fastest second and third sectors to break into the 1:50s.

Boschung improved on his next run, after setting the fastest first and final sectors times, to set a 1:49.811, with Christian Lundgaard also breaking into the 1:49s with a 1:49.871 to move up to second.

Drugovich responded to Boschung’s time by going four-tenths quicker with a 1:49.423 as traffic trouble hit the likes of Theo Pourchaire, causing him to abandon his lap.

Piastri and Lirim Zendeli would be visiting the stewards after the session after the pair were put under investigation for an unsafe release in the pit lane.

With just under 20 minutes left in the session, Drugovich led Boschung and Pourchaire with Zhou, Jüri Vips, and Lundgaard rounding off the top six as the majority of the field returned to the pits.

Local hero Robert Shwartzman gave his supporters something to smile about, with the sixth-fastest time, but the Ferrari Driver Academy member was still slower than Drugovich in the first and third sectors.

Alessio Deledda’s Practice session came to an early end as the Italian spun on the exit of Turn 15, stalling the HWA Racelab car and bringing the red flag out with just over eight minutes left in the session.

The session resumed with just over three minutes left to go, with the majority of the field leaving the pits to try and get one more quick lap in before the checkered flag fell.

But no one could improve on their times, and it was Drugovich who finished Practice quickest ahead of Boschung and Pourchaire, with Zhou, Vips and Viscaal completing the top six.

Shwartzman finished the session seventh quickest ahead of Lundgaard and Richard Verschoor, whilst championship leader Piastri rounded off the top 10. 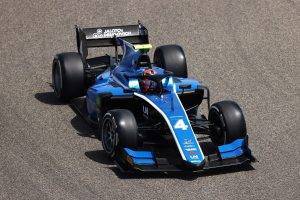