Felipe Drugovich topped Practice in Spain for MP Motorsport in a strong start to the weekend for the Brazilian driver.

Jehan Daruvala and Logan Sargeant set the second and third quickest times in Barcelona in a very disrupted session.

At the green light Theo Pourchaire embarked on an installation lap for ART and immediately drove back into the pit lane at a baking hot Circuit de Barcelona-Catalunya.

A plethora of drivers followed the Frenchman to check all the systems on the Dallara built chassis.

The session was a slow burner in the opening stages with a lack of push laps in the first few minutes.

Jake Hughes became the first driver to complete a representative flying lap five minutes into the session and set a 1:32.968.

Olli Caldwell suffered a big crash at Campsa which brought out the red flags ten minutes into the session.

The 19-year-old spun as the rear of the car stepped out in the middle of the turn but fortunately he walked away unhurt.

The 45 minute session resumed with 26 minutes left after Caldwell’s car was cleared from the circuit.

Pourchaire struggled to fire up the Mecachrome engine after the red flag but the Sauber Academy driver eventually pulled away on the white hard compound tyre.

A flurry of drivers took to the circuit following the red flag including Juri Vips who will take part in his first Formula 1 FP1 session in Catalunya.

He will drive Sergio Perez’s Red Bull RB18 and should gain valuable experience from the outing.

New Zealander Marcus Armstrong spun at Repsol and got stuck in the gravel bringing out the second red flag of the session.

Armstrong’s shown good speed in 2022 but the Kiwi has made the occasional error in his third season of FIA Formula 2.

The sole practice session got underway again with 17 minutes remaining as the drivers poured onto the circuit trying to make up for lost track time.

Vips was immediately on the pace setting a the quickest sector two time of anybody and going straight to the top of the times with a 1:31.919.

The Red Bull Junior soon fell back into P4 as Drugovich, Dennis Hauger and Alpine junior Jack Doohan went quicker than him.

Daruvala ran wide at Repsol in a very similar incident to Armstrong’s earlier spin but managed to continue.

The Indian redeemed himself after his error and went second quickest for PREMA with a 1:31.369, four tenths slower than the pace setter Drugovich.

Drugovich ended the session quickest ahead of Daruvala and Sargeant with Doohan and Liam Lawson rounding out the top five.

The top ten was separated but just nine tenths of a second with Vips, Ayumu Iwasa, Pourchaire, Hauger, and Calan Williams completing the top ten of a very competitive Practice session. 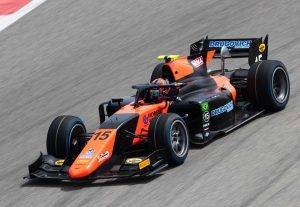