Drugovich Wins in the Netherlands as Doohan Loses Podium

Drugovich Wins in the Netherlands as Doohan Loses Podium

Drugovich took his fifth win of the season while safety car chaos means multiple drivers will be investigated after the race.

Drugovich led the pack away from pole ahead of Jack Doohan who had the better start of the front two. Drugovich managed to hold off Doohan by cutting across before Turn 1.

Behind them, Logan Sargeant locked up, sending him to the gravel, and then to the back of the field from third. Dennis Hauger took advantage of Sargeant’s misfortune by taking third from seventh on the grid. A great start from the Norwegian after taking his first podium since Baku in yesterday’s Sprint Race.

Sargeant’s Feature Race went from bad to worse during a battle with Ralph Boschung. The American driver hit the back of Boschung’s car, which broke his suspension and subsequently led him into the barriers at Turn 7. A disappointing end to his race after putting himself into championship contention before the Summer break

David Beckmann came together with Roy Nissany under the safety car which damaged the front wing of his VAR. The initial contact was between Beckmann and Marino Sato, the incident was seemingly caused by confusion of who was in front when the safety car was thrown.

Théo Pourchaire started from the back of the grid after a crash in qualifying on Friday. A sequence of impressive moves throughout the opening stages of the race brought the championship rival up to 13th.

The damage to the barrier caused by Sargeant’s crash brought out the red flag on Lap 5 of the race.

Drugovich led the rest of the grid away once again for the rolling start after the red flag. The race leader went early and generated a decent gap between himself and Doohan for the restart. Further back, Marcus Armstrong and Clément Novalak made contact into Turn 1 while fighting for seventh position. Both were able to continue without damage.

Doohan tried to make a move into the first corner a couple of laps later for lead of the race. He locked up heavily, which caused him to fall back since he had a huge flat-spot which was slowing him down.

Dennis Hauger was the first of the front runners to pit from third on Lap 11 of the Feature Race. Despite a quick stop, he was held in his pit box for an extended amount of time in order to let Enzo Fittipaldi through, avoiding an unsafe release.

Doohan pitted two laps later to get rid of the tyres that he had flat spotted a few laps ago, just over one second behind Drugovich for the lead. The Brazilian driver pitted the next lap and was able to get out ahead of Doohan and with more of an advantage than before.

Richard Verschoor managed to overcut Doohan momentarily for net second position. Verschoor was one of the last of the soft runners to pit, which paid off massively for the home hero.

The safety car made its second appearance of the Feature Race as Sato found the wall. The Virtuosi driver had just come into the pits and lost one of his tyres, the incident will be more than likely investigated as an unsafe release.

The top six, led by Liam Lawson became vulnerable since the new rule change meant himself and those behind him were unable to take their mandatory pit stops under the safety car.

A big crash during the restart meant that Doohan, Novalak and Calderon were forced to retire from the race. An unfortunate incident for Doohan who was having an incredible race and was in contention for his fourth win of his career. Lawson held the pack up but insisted over the radio that he hadn’t changed his speed.

The leading six eventually pitted to make their mandatory stops, all of them dropped a long way down the field. This meant that Drugovich led the race, once again, ahead of Verschoor.

Théo Pourchaire eventually made his way up to tenth after a charging drive. He earnt one point for his efforts, minimising the damage from his crash in qualifying.

The race went to time as Drugovich took another great win. His championship looks likely to be won in Monza next weekend as he picked up 24 points more than rival, Pourchaire. He has a 70 points lead going into the penultimate round of the 2022 season. 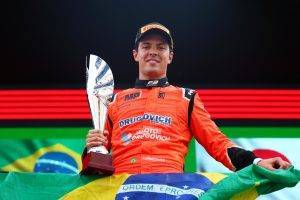