Following the FIA Formula 2 Sprint Race in Barcelona, Felipe Drugovich, expressed how the experience he’s gained in his three years of F2 racing is making all the difference in his 2022 Championship campaign:

“It’s really early to talk about the Championship yet, but that’s what I’m trying to do. Consistency has always been key and it’s not going to be different this year.

“I think experience counts a lot. It’s already my third year in F2 so some things you have to learn.”

Spending his second season with MP Motorsport, after a stint with Virtuosi, in 2021, something is clicking into place for the Brazilian this year:

“I think to be fair what I missed a lot last year, I missed some starting opportunities that I shouldn’t have missed, and I’ve just learned from that. I’ve tried to be more consistent this year, and be there every time.”

Drugovich got off to a dream start, after reverse-grid pole sitter, Calan Williams, stalled before the action began. Second place, Jake Hughes started well, but his second phase down to the first corner saw him lose the inherited lead.

Championship contender, Théo Pourchaire also got himself bogged down. Drugovich took advantage, and went from third to P1.

“On the formation lap when I saw Calan had stalled the car, I could focus on that. I knew that if I had a good start I would have more space.

“I was just focussing on making a good start, and once I got it I just went to the left and there was some space there.”

Drugovich was under pressure from Ayumu Iwasa after the Safety Car restart, but held onto first place, and made a comfortable enough gap to dominate the Sprint Race after a year’s absence from the Catalunya circuit:

“He was not so far away in Turn 1, but once I got away it was pretty straight forward and I could control the race again, and I was quite happy.”

Whilst those behind him struggled with tyre degradation, Drugovich maintained his lead without concern:

“When you’re out in front you can manage the tyre deg a lot easier. For me it was quite ok. I decided not to go too fast. It was better than what I expected. I could control it as I wanted.”

The Brazilian starts tomorrow’s Feature Race in the Championship lead. Can he extend his gap further? 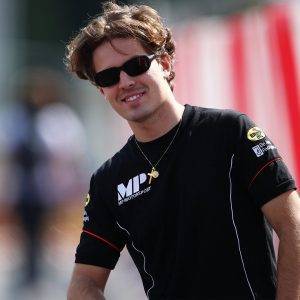