Drugovich’s Goal to Drive in Formula 1

Drugovich’s Goal to Drive in Formula 1

“They’ve started this programme now, and with me, so for sure the goal is to take me to the drive in F1, and my goal is to be in F1 one day. So I’ll be working really hard for that, and together with them.

“Because of this programme, I’ll be their reserve driver also for them next year. The most I can do is just to learn and try to be as prepared as I can for a future opportunity.”

After several name changes across the Silverstone based team’s history, Lawrence Stroll, has reestablished the elite Aston Martin marque in F1.

“The [Aston Martin] brand is massive and I’m really very pleased to be representing the name. I’m just so happy. Hopefully I can keep doing a good job and one day if I can represent them in Formula One and also represent my country, Brazil, then that will be amazing.”

The Brazilian National Anthem has been a familiar tune to F1 race fans over the years; Ringing out from the podium many times, notably for motorsport legend, Ayrton Senna. Though there has been an absence of race winners, since the successes of Felipe Massa, and Rubins Barricello.

“To represent my country it will be everything for me. People in Brazil they are really lonely of a driver and they really want someone to cheer for, and hopefully I can be the one they cheer on.”

When Drugovich does get his Formula One opportunity, he will be competing alongside familiar faces he’s raced against in his career. Already there are feeder series graduates in F1 seats, and there are plenty more to follow.

“Formula One has taken a step to be a bit younger now, and I’ll be very happy to get an opportunity to be there. It’s going to be like F2 in the end. All of the people that I raced against in F2 are all the ones driving in F1 right now, so it will be quite fun.”

“It’s such an opportunity. I got to share his [Vettel’s] last weekend in Formula One, in FP1. He’s such a nice guy. He’s been really nice to me. He’s a very reserved guy. He doesn’t talk to everyone just for the sake of it, but he’s a very nice guy once you speak to him.

“Working with him, I can really understand why he’s a four-time World Champion. I can admire a lot.

“Going forward next year, I’ll be working with Fernando as well which will be such an honour. I’m very happy with that.”

It was Lance Stroll’s Aston Martin that Drugovich took out for a spin in the FP1 session of the Abu Dhabi Grand Prix, popping in a fastest time of 1:28.672.

Taking part in the end of season young driver test, Drugovich finished strong, with a 1:26.595, that was good enough to finish in 15th, after 106 laps.

When asked about his Formula 1 World Championship dreams, Drugovich replied:

“I try not to focus so much on the future and more on the now. Obviously I think I have the capabilities to be there one day, but it depends on a lot of things; I just need to sit tight and wait, and prepare to be there myself.”

It’s been our pleasure here at insideF2 to bring you the stories of Felipe’s Formula 2 career to date, and we wish him the very best of luck in his Formula 1 career. 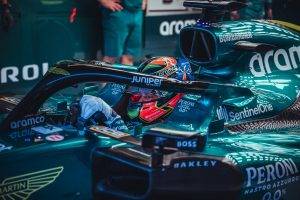