Théo Pourchaire, the new leader of the FIA Formula 2 Championship, has said that “everything went well” for him on his way to victory in the Imola Feature Race.

The ART Grand Prix driver came through to win while many of his rivals faltered. Jack Doohan and Dennis Hauger both retired after coming together at what was a frantic race start.

Pole-sitter Jüri Vips ran wide on the exit of the Villeneuve chicane and crashed out, before former race leader Roy Nissany made a similar mistake and was forced to park his stricken DAMS in the pits.

Meanwhile, Pourchaire remained calm and emerged the championship leader after taking crucial points. Speaking in the post-race press conference, the Frenchman was delighted with his result:

The weekend’s racing was far from straightforward for the Sauber junior driver, who had never raced at the Imola circuit before, and could gain very little meaningful experience from an interrupted Practice session and a wet Qualifying.

The highest-placed returning driver from last season has reiterated his quality once again, and has now won two out of the first three Feature Races in which the bulk of the available points lie. Remaining consistent and avoiding the mistakes which cost his rivals are key targets for the 18-year-old:

“I try not to do stupid moves. Yesterday I was not in a great place but I still managed to grab two points which was important and maybe it will be very important by the end of the Championship.

“I try to be clever: we try to not do the fastest pit stop, we just try to put the wheels on the car, I try to not take many risks at the start. We have to take as many points as possible and be consistent.”

Théo’s win was made even more special as he shared the podium with Enzo Fittipaldi. The pair collided after Pourchaire stalled at the race start in Jeddah last year, with Fittipaldi being hospitalised with a fractured heel among other injuries.

“I was thinking about that [crash], being together on the podium… it’s amazing. I didn’t know he was really P2, he started P15! It’s amazing to both be on the podium, I love motorsport for that.” 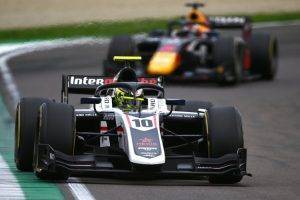