EXCLUSIVE: Charouz intend to keep Calderón and Fittipaldi for 2023

EXCLUSIVE: Charouz intend to keep Calderón and Fittipaldi for 2023

Charouz Team Principal Bob Vavrik revealed to insideF2 that they intend to keep Colombian driver Tatiana Calderón with their FIA Formula 2 team in 2023.

Commenting after a difficult day for Calderón, the only female driver currently in Formula 2, Vavrik told insideF2: “The plan is to continue in F2. The intention is just to build up and continue also for the test at the end of the year.”

Calderón, 29, had previously raced in Formula 2 with BWT Arden in 2019, alongside Anthoine Hubert, and also competed in the NTT IndyCar Series with A. J. Foyt Racing this season, Tatiana replaced Turkish driver Cem Bölükbasi after the summer break through August.

Vavrik also backed his driver following the Sprint Race in Zandvoort where the Colombian stalled on the grid and then ended her race early by spinning off into the gravel.

“There was a mistake, she knows that, but we have no expectations. It’s from no big experience with a new car, new tyres, everything is different, so she comes and she needs to work from zero,” explained Vavrik, adding that Calderón’s return to the series in Spa went well and that Saturday in Zandvoort would not cause him any issues.

Vavrik also confirmed that keeping Brazilian Enzo Fittipaldi, alongside Calderón, was “one of the scenario’s” for the team in 2023.

“One of the plan’s is like that, I can confirm that it’s one of the possible scenario’s,” Vavrik said.

Fittipaldi has been one of the star performers in Formula 2 this season, scoring five podium finishes for the Czech team, with eight other points scoring results, marking a big improvement for the team who finished last season 10th in the Teams’ Standings with just 28-points.

Charouz are eighth in 2022, with five races remaining, Fittipaldi having scored all but four of the teams’ 105-points, while the Brazilian is sixth in the Drivers’ Standings. 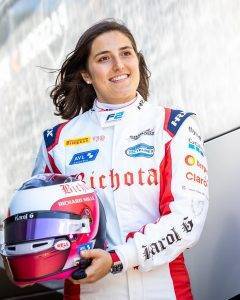