Exclusive: Claiming Formula 2 title will “mean a lot” to Drugovich

Exclusive: Claiming Formula 2 title will “mean a lot” to Drugovich

Formula 2 comes to Monza this weekend, ready to crown a brand new champion, Brazil’s Felipe Drugovich. His season so far has been one of consistency and excellence, scoring 5 wins to currently lead by 69 points, a lead which will likely become unassailable by the end of the weekend.

Speaking to InsideF2, Drugovich said that approaching this weekend, he was “trying not to change anything, just trying to do the same job”, not letting the pressure of the title get the better of him. He further added that the objective was to “score the points, bring the points home, hopefully, win some races”, aiming to add a 6th win to his already impressive tally.

Drugovich is no stranger to Monza, having raced at the track since 2018, and he gave the following thoughts on the circuit:

“I’ve been here, I really enjoy the track. It’s really cool, really fast, big brakings, and also it’s kind of a home race for me too, because I’ve lived in Italy for 8 years now, and I’ve got some friends coming over, which is amazing.”

Who’s inspired this mighty performance from the Brazilian? To Drugovich, it’s actually “a bit of everything” that’s made the difference throughout 2022. Expanding further, he added that “the fans made it incredible”, but also payed tribute to the team behind him, stating that “they helped me a lot, through the difficult moments” as well as the high points.

Speaking about his high points of the year, Drugovich offered the following:

“Well Monaco, first of all, that was the big one for us, and we managed to get it all, pole and win. I think the home race for the team in Zandvoort. I think overall, just having the consistency we had this year is something really great.”

But there’s one more accolade which would surely make Drugovich proud, and that’s to become Formula 2 champion – a title which will likely become his this weekend. When asked what the title would mean to him, he stated that “it’s gonna mean a lot” to him, adding that “if I get there [Formula One] one day it’ll be a consequence of this” title.

As a final comment, Drugovich stated that being where he was in racing was “just something really great” – a feeling he will hope carries into the future, as his crowning moment creeps ever closer. 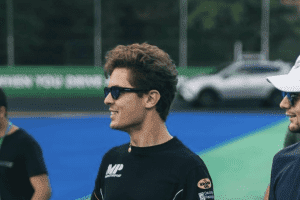