Should the 2020 Championship be Online?

Should the 2020 Championship be Online?

What if we replaced the physical F1 Championship in 2020 with an online version? What if we mixed up the playing field and threw the Formula Two and Formula Three teams in the mix and did an F1 to F3 Championship and broadcast it live to the world! Would you watch it?

The world of Formula 1 has left Australia with more questions than answers. Following the chaotic developments of the (at the time) 2020 Formula 1 season opener, motorsport fans all over the world have been left wondering when it will all go back to normal.

Many personalities of motorsport, like Jean-Eric Vergne, have tried to rally their fellow drivers into competing in an online championship. Fans reacted ecstatically to these calls and flocked to the two main esports events organized on Sunday, March, 15th: the All-Stars esports Battle by The Race, and Not the Australian GP by Veloce esports.

Both events featured real-life drivers, professional sim-racers, and fan-favorites like Jimmy Broadbent. The presence of current F1 Championship stars Max Verstappen and Lando Norris contributed to the feeling of legitimacy of these races, which were followed by tens of thousands of watchers.

The All-Stars esports Battle took place on the Nurburgring circuit, which was only revealed last minute to the participants. It was organized in three heats (8-lap qualifying race), where the top-8 gained access to the final race (12 laps).

Each qualifying race had a different mixture of participants, resulting in a very mixed field for the final round. Max Verstappen managed to comfortably take pole position and win the first heat, but could not fight for the final victory because of different spins and accidents in the final race.

This event used the well-known rFactor 2, which is a fairly complex simulator, using a car based on the Marussia MR01 from the 2012 F1 season. Victory went to the Slovene Jernej Simoncic, professional sim-racer, after a commanding performance. Max Verstappen had some scraps during the first laps and eventually managed to finish 11th.

Felix Rosenqvist was the best among the real-life drivers, finishing in an impressive 7thplace. All in all, the event was followed by more than 80,000 concurrent viewers on the live YouTube stream.

The Not the Australian GP event, on the other hand, decided to run the official F1 Championship 2019 game from Codemasters, which has a less sophisticated physics model to favour more casual players. It still features some interesting simulative elements, like the management of fuel mixtures and ERS deployment modes, and of course features all of last years drivers, teams, and circuits.

This event featured an inspired Lando Norris and was followed by an impressive amount of people. During the race, he managed to reach more than 70,000 concurrent viewers and become the top stream on Twitch, while the mainstream by Veloce esports has now almost reached 350,000 views overall (at the time of writing).

While the hunger for motorsport cannot be easily satisfied, these streams have demonstrated that online races can be a much-needed fix for the fans.

The younger generation of drivers is very familiar with sim-racing and would likely be in favor of attending such events. Norris and Verstappen have regularly taken part in different events on iRacing, including endurance races, and have a very established online presence.

CHECK OUT THE RACE RESULTS: (Watch YouTube @Veloce Esports below)

The ball now is the FIAs court: will they think of sanctioning some sort of online event? Perhaps an online Formula 1 (for the world) Championship with the current F1 Championship grid battling it out on the virtual race track on equal machinery. Personalities like Hamilton or brands like Ferrari could rally millions of fans around the world at a moments notice.

Any money raised via sponsors and audience could be destined to the areas most afflicted by the current COVID-19 pandemic. This could contribute to solving at least part of the backlash that the F1 circus received in Australia.

Yesterday’s successes were certainly not the for real-life motorsport, but they did open a great opportunity for esports to become more and more mainstream. Will Liberty Media and the FIA manage to ride the wave, and offer the fans some much-needed relief in these hard times?

Would you be interested in following young drivers like Mick Schumacher fight on a virtual race track with the likes of Lewis Hamilton and Kimi Raikkonen? The possibilities are virtually endless.

Let us know in the comments! 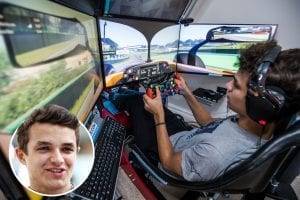