The Formula 1 Fan’s Guide to Formula 2

The Formula 1 Fan’s Guide to Formula 2

So… you love Formula 1 with a passion but haven’t watched many (or any) Formula 2 races?

It has been a long wait for racing with all that’s been going on! Formula 1 as normal will get top billing as the premier series, however, we know that there are Formula 1 fans out there who want to engage with the Formula 2 Championship but can be a bit intimidated with the format and unfamiliar teams.

Hopefully your interest has spiked recently following the #VirtualGP and #RacefromHome series. We have seen drivers from Formula 2 and Formula 3 guest star not only on their own races but also on the F1 virtual formats.

Many fans may have also noticed last year the Schumacher name floating around the paddock? Or, during the 2019 F1 season did you suddenly become curious because of the plethora of former F2 stars, breathing fresh air into the Mother Ship? If the answer is yes, you’ve come to the right place…

This is your guide to what’s what, who’s who, and why.

The FIA and former GP2 Series formed an agreement in 2017 to create Formula 2. The idea was, it would be a training ground for emerging drivers.
With 20 identical cars on the track and just 12 races on the calendar, the F2 season is noticeably lighter in load than its elite parent, with the season beginning in  Austria with Formula 1.

Despite the abundance of young talent in 2019, opportunities to move into F1 from F2 isn’t a given. The young drivers still have to possess the magical potion of ingredients to become a racing track star.

There are some familiar names to look out for this F2 season; Giuliano Alesi (son of Jean); rookie, Pedro Piquet (yes, you’ve got it, son of Nelson); Marino Sato son of Japanese favourite Takuma Sato and, arguably the most famous son in motorsport, Mick Schumacher, Michael’s heir. Beginning his F2 career last season, he continues with Prema Racing in 2020.

All cars are created equally

The engines, tyre supplier and chassis are produced exactly the same for each team, meaning each driver has an equal opportunity. This evens out the playing field and driver talent can be fairly judged.

Pirelli, provide the slick/wet tyres. And, as of the new 2020 FIA regulations, 18″ rims have been introduced to both F1 and F2 cars. The two formulas also have the same Halo spec and DRS function. Phew! That’s the technical side over with… For now.  (Check out our “Understand F2” page for more detail.)

What do Points Make?

As well as practice, and a Qualifying session, there are two, yes you read correctly, two, main races held over the F2 Grand Prix weekend. The second of which is a reverse Top 8 to the Feature Race (Race-1) finishing order. The same points as F1 are awarded for finishing in the top 10 in Race-1 (+4 points Pole Position/+2 points Fastest Lap). Additional points are awarded for the Sprint Race (Race-2).

Some F1 fans have suggested the same idea for the main event itself; A reverse grid. As have points for Pole Position. Tune in to decide for yourself what you think!

Sadly, Formula 2 is not without its dangers and perils. During the 2019 Spa-Francorchamps, Belgian Feature Race, Anthoine Hubert suffered a fatal crash on Lap 2. Involved in the same incident, was Giuliano Alesi (unhurt), Ralph Boschung (unhurt), and Juan Manuel Correa, who was seriously injured and is currently in rehabilitation.

It is a fast and dangerous sport and all who are involved are as respected in the paddock as the higher class Formula 1.

While this driving grade is a stepping stone into F1 for the drivers, Formula 2 is an enjoyable championship worth watching in its own right, and the fan base is growing.

So, if you’re a motorsport enthusiast and you want to know who the next golden generation of Formula 1 drivers will be, Formula 2 is the place for you…

We’ll see you there! 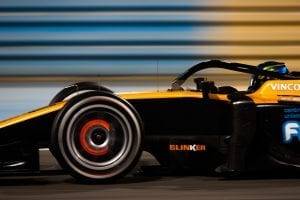