Newly-crowned 2021 FIA Formula 2 Champion Oscar Piastri capped off a dominant campaign in style with his sixth race win of the season in the Abu Dhabi Feature Race.

Yet another excellent performance for the Australian driver will only add to the bemusement among fans that such a talented driver has not be rewarded with an F1 seat for 2022.

Piastri was joined on the podium by Guanyu Zhou, who will join Valtteri Bottas at the Alfa Romeo F1 team in 2022, and Felipe Drugovich, who was the quickest of the drivers opting for the alternate strategy, running a long first stint on the medium tyres.

After a hectic opening lap with almost the entire field running two-by-two, in which Lawson and Doohan spun through Turn 10 and 11, causing the latter to retire, the race settled into a tactical battle between the two tyre strategies.

Those who pitted late would came out with vastly superior grip, hunting down drivers who had stopped earlier, with Shwartzman falling prey to Drugovich and Théo Pourchaire who easily breezed past on their fresh rubber.

There was wheel-to-wheel action even before the lights went out, with Guilherme Samaia released unsafely while embarking on his lap to the grid, making contact with Piastri, forcing the newly crowned champion to change his nose ahead of the formation lap.

Pole-sitter Piastri made a good start, retaining the lead from his countryman Jack Doohan, who started on the medium compound tyres and came under pressure from Guanyu Zhou, on the grippier ultrasoft tyres.

Vips made contact with Lundgaard, spinning the ART driver around as the field concertinaed together going through turn 6. The Estonian driver would later be dealt a five-second time penalty for the incident.

Doohan and Zhou were battling going through Turn 9, as were Shwartzman and Lawson. Both Doohan and Lawson ran wide on the exit, both spinning while rejoining at an awkward angle, with dust and marbles on their tyres.

Lawson managed to continue, but Doohan’s MP Motorsport found the barriers, bringing out the safety car, with the young Aussie thankfully uninjured.

Piastri made a strong restart, establishing a good gap to Zhou on Lap 5 as Pourchaire, the lead driver on the medium tyres, came under pressure from Ticktum.

On Lap 8, there were signs that the tyre strategy crossover point had been reached, as Pourchaire began to pull away from Ticktum, as the Brit’s softer tyres fell away.

A flurry of pit stops then followed, with Shwartzman pitting at the end of Lap 9, with Piastri and Zhou pitting a lap later, both coming out still ahead of the Russian behind.

Ticktum had pitted earlier than Ralph Boschung, and passed the Swiss driver while he was still bringing his medium tyres up to temperature.

Drugovich and Pourchaire fought to be the lead driver on the alternate strategy, risking a loss of time as they battled.

The bollard on the apex of Turn 16 was dislodged on Lap 17 as it had been during Formula 1 Qualifying, but luckily rolled off the racing line at the start of the pit straight.

A brave marshal ran onto the track a lap later during a gap in traffic to retrieve the bollard, avoiding a safety car.

Pourchaire showed impressive pace, lapping faster than Piastri despite being on much older tyres than the Prema driver, and making a gap to Drugovich behind.

Vips and Armstrong pitted on Lap 25, the first on the alternate strategy to do so. Armstrong easily swept past Boschung and then Lawson, hinting at the extra performance of the new ultrasoft tyres.

Pourchaire made his crucial pit stop on Lap 27, as Drugovich went a lap longer on the medium tyres, while Lawson pulled off with a mechanical issue.

A slightly slow stop for Pourchaire allowed the UNI-Virtuosi driver to rejoin ahead a lap later, albeit with colder tyres which brought the two side-by-side again on the run to Turn 6, before a VSC put the battle on hold while Lawson’s stricken Hitech was recovered.

Piastri retook the lead of the race after all pit stops had been completed, while drivers on the alternate strategy behind sought to charge forwards on their brand new soft rubber.

After the VSC ended, Drugovich and Pourchaire passed Shwartzman with ease, the Russian powerless to defend against such a tyre advantage.

The Brazilian and Frenchman came home in 3rd and 4th, perhaps rueing what could have been had they not battled with each other.

Piastri took the chequered flag for his sixth win of his dominant third championship-winning season in a row, and enjoyed some well-deserved donuts to celebrate.

Shwartzman retained 2nd place in the championship to make it a 1-2 for Team Champions Prema, while Guanyu Zhou finished third in the overall standings. 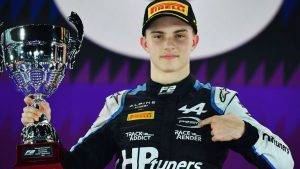