First Practice 1 at the 2021 Formula 1 Austrian Grand Prix was something of a 2020 FIA Formula 2 Championship reunion, with six drivers from last year’s F2 grid behind the wheel of the F1 cars.

The current Formula 2 Championship leader Guanyu Zhou took charge of Fernando Alonso’s ride, finishing the session in P14 and becoming the first Alpine academy driver to feature in an F1 weekend since its inception in 2016.

16 years after being photographed waving a flag of the 2005 championship-winning car, the Uni-Virtuosi driver impressed with a clean session, and was just a tenth behind team mate Ocon until the Frenchman went four tenths quicker on soft tyres.

After narrowly missing out on an F1 seat for 2021, the Ferrari Academy driver has taken on a role as test driver for the Scuderia and will hope that the experience gained in today’s session pushes him closer to a full-time F1 drive.

DAMS driver Roy Nissany had his third outing in the FW43B, besting fellow Williams driver Latifi by nearly three tenths in a solid outing for the British team.

The three drivers enjoyed quiet sessions that mostly escaped the gaze of the live coverage, although Nissany and Ilott briefly featured in P1 and P2 in the speed trap graphic late on in the session.

Zhou, Nissany and Ilott will be pleased with their uneventful sessions, as they gained valuable experience of their cars and teams, while keeping their expensive Formula 1 machinery in one piece and staying out of trouble.

That is more than can be said for the fifth-placed driver in 2020 Formula 2 Nikita Mazepin, who – not for the first time this year – proved unpopular with his fellow drivers.

The Russian driver frustrated Lewis Hamilton as he impeded the seven-time world champion on the outside of Turn 3, and incurred the wrath and one-fingered salute of 2007 world champion Kimi Räikkönen on his way to P20.

His Haas team mate and reigning F2 champion Mick Schumacher went seven tenths quicker to take P17. The young German will be satisfied with his strong session and will hope to build a positive weekend.

Tsunoda was the standout graduate from the F2 class of 2020, taking fifth place, four places and two tenths ahead of Pierre Gasly, who has tended to have the upper hand in the battle at AlphaTauri this season.

The young Japanese driver is beginning to mature in his maiden F1 season after a rocky start, as he survived a trip through the gravel on the exit of Turn 4 to finish the session just three tenths off Max Vestappen’s chart topping time.

Zhou, Ilott and Nissany will hand their cars back to the full-time drivers, while Schumacher, Mazepin and Tsunoda will hope to put together a strong weekend to make a good showing for the F2 graduates. 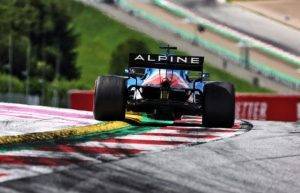