F2 Drivers Give Verdict on Zandvoort

F2 Drivers Give Verdict on Zandvoort

After the Zandvoort Sprint Race, the top three finishers gave their verdict on the track which is hosting Round 12 of the FIA Formula 2 Championship. The grandstands were packed with Dutch fans, making for a great atmosphere, but the track itself made overtaking very difficult for the drivers.

At the Sprint Race start, Marcus Armstrong managed to draw alongside pole-sitter Clément Novalak, and went up the inside at Turn 1 and into the race lead. Behind, Dennis Hauger went all the way around the outside of Jüri Vips in the first corner and held the inside for Turn 3 as he took the final podium position.

After that first lap, overtakes were incredibly scarce, and the only move of note was Ayumu Iwasa moving past Richard Verschoor to take P6 after the Safety Car restart on the final lap.

During the post-Sprint Race press conference, the drivers gave their verdict on Zandvoort, and on the whole, came to the defence of the track. Armstrong, the Sprint Race winner, shared his thoughts on the track:

“It’s a crazy cool track, there’s a lot of banking; it’s very satisfying. It’s very challenging to maximise the car, maximise the grip you have… in the race it’s a completely different story. There’s so much energy on the tyre that you just really can’t push to the maximum of your ability.”

Runner-up Novalak was unable to close the gap enough to have a genuine chance to take the race lead, but shared Armstrong’s appreciation for the circuit, despite the difficulties in overtaking:

“Every time you got within a second you’d start to get brake fade, you’d start to get overheating in the tyres. Overall the layout is awesome, it’s a proper driver’s track, it’s quite old-school: you make a mistake and it’s quite easy to go off. The only negative aspect of it is the racing.”

Hauger followed up, also making the distinction between driving the track on a Friday and racing with other cars on the weekend:

“As a Qualifying lap, I really enjoy it, it’s one of my favourites this year. In the races it’s not as easy, but the track itself is really cool, and I enjoy it round here.”

The fans sparked controversy during Formula 1 Qualifying after flares were thrown onto the track, disrupting the session. However, the drivers were unanimous in their praise for the fans at Zandvoort. It seems they’ve been giving Armstrong the celebrity feeling in the paddock:

“It is quite remarkable how passionate theses fans are. Leaving the track each evening, I feel like I’m a Jonas brother or something! It’s crazy how many people there are, they all stayed to watch the F2 which doesn’t often happen.”

Novalak was also eager to show some love for the Dutch fans, at MP Motorsport’s home race:

“Last year [in F3] I felt like I was in a football stadium for about 72 hours. The fans are completely crazy, I love it! It’s really cool to see that passion in so many people… overall it’s a great event, and I love coming here.” 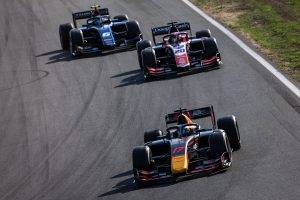