Taking the usual route of Formula Renault and Formula 3 then GP3, Alex Albon graduated to Formula 2 in 2017.

Joining ART, Albon ended his first season in a respectful 10th place in the Drivers’ Championship.

A move to DAMS for the 2018 season saw him achieve even better results.

Baku saw him on the top step of the podium for his maiden Formula 2 victory. It would be the first of three Feature Race wins.

On the race start Albon briefly lost his pole advantage to George Russell, but the British-Thai driver quickly nabbed it back.

Russell’s pit stop strategy saw him gain the advantage over Albon who came in for his pit stop a lap later.

Albon lost out and had to settle in fourth place behind Nyck de Vries and Roy Nissany, until the latter found the wall at Turn 4, ending his race.

The mishap deployed the Safety Car for the second time.

On the restart de Vries and Russell left the track in an incident and Albon ran wide, allowing Antonio Fuoco to take the lead. It wasn’t long before a determined Albon charged past the Italian to celebrate his first Formula 2 victory.

His first Sprint Race victory was at the Hungaroring, three races prior to Russia.

He had a P2 in Spain. And, three third place podiums at Spa, Sochi and Monza.

In a closely fought battle, the title decider went down to the wire in Abu Dhabi.

Russell came out on top, and Albon was an agonising seven points behind runner-up, Norris. He finished the season third, with 212 points.

By the end of the season Albon had been drafted to Formula-E with the DAMS team. That was until the Toro Rosso Formula 1 team swept him up…

“It’s such an amazing feeling to know that I’m in Formula 1 next year.”

”I worked really hard and tried to impress every time I got in the car, and I have to say a big thank you to Red Bull and Dr Marko for believing in me.”

“It’s been my dream to be in Formula 1. To be given this opportunity is just incredible.”

During his first season with Toro Rosso, Albon was promoted to the Red Bull team in a prodigious move.

Out of 20 drivers, he ended his rookie season in eighth place.

This year Albon secured a solid podium at the Tuscan Grand Prix, in a race full of incident and drama.

He’s currently fifth in the Drivers’ Championship, ahead of many seasoned drivers, and just one point stands between himself and Norris.

Isn’t it great to see the recent batch of Formula 2 Graduates doing so well amongst the elite?

And, wasn’t it wonderfully nostalgic watching Albon, Norris and Russell fight it out on track, like old times, at the recent Russian Grand Prix? 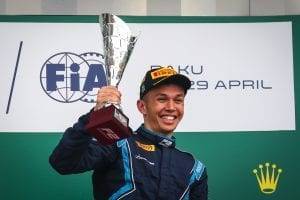