On a weekend that revealed FIA Formula 2’s influence on Formula 1, with six of the F2 class of 2020 featuring in FP1 at the Red Bull Ring, the F2 graduates enjoyed varying degrees of success.

Guanyu Zhou, Callum Ilott and Roy Nissany all got a brief taste of F1 speed in FP1, before handing the cars back to the full-time drivers. They managed to keep the Formula 1 machines in one piece, enjoying clean and insightful sessions, furthering their experience of the highest level of motorsport.

The AlphaTauri driver received a five-second time penalty for crossing the white line on pit entry at his first stop. He then repeated the transgression at his next visit to the pits, receiving another penalty on his way to a disappointing P12 finish.

The Japanese rookie had enjoyed a super Saturday to qualify in P7, snapping at the heels of teammate Pierre Gasly. Yuki will be ruing the missed opportunity and fearing the inevitable uncomfortable meeting with Dr. Helmut Marko.

Formula 2’s 2020 Champion Mick Schumacher emerged unscathed from a Lap 1 incident in which the German was one of the slices in a sandwich that saw contact between Antonio Giovinazzi and Esteban Ocon, causing the latter to retire.

The Haas pairing of Schumacher and Nikita Mazepin brought up the rear of the pack, finishing in P18 and P19 respectively. Both rookies have endured difficult starts to their F1 careers, grappling with a car that lacks pace and looks tricky to drive.

Following the controversy surrounding the Russian’s car being heavier than that of his teammate, both drivers will be hoping for an upturn in their fortunes and will be desperate for a 2022 machine that allows them to demonstrate the talent they showed in Formula 2.

2018’s king of F2, George Russell impressed on Saturday once again, with a sublime qualifying session that saw him take his Williams car into Q3 for the first time, on the slower medium tyres for an optimal race strategy. The Brit lined up in P8 for Sunday’s main event, after Sebastian Vettel received a three-place grid penalty for impeding Fernando Alonso.

The Mercedes junior driver suffered a difficult opening lap and fell out of the points. After a strong drive and a good strategy, Russell took P11 at the chequered flag after he was passed by Alonso in the last laps, following a valiant defence of the final point.

Lando Norris was the star of the F2 graduates, as the 2018 Formula 2 runner-up overcame a five-second time penalty for forcing Sergio Pérez off the track to take a thoroughly deserved podium finish.

The McLaren driver is emerging as one of the standout drivers in F1 in 2021, comfortably outperforming teammate Daniel Ricciardo and not looking out of place when mixing it with the front-runners.

Formula 2’s recent graduates will aim to emulate Norris’s impressive form and consistency to repeat the success they enjoyed in Formula 2, and will hope to do better in future races. 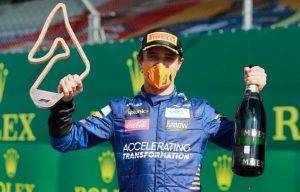