After a stellar career in Formula 3 and World Series by Nissan, Finnish driver Heikki Kovalainen stepped up to the newly renamed GP2 Series for 2005.

The ice cool Finn teamed up with the Arden International squad for the 2005 season in what would be his one and only year at the second tier of motorsport.

Heikki also had some tough opponents to deal with on the track. Drivers such as Nico Rosberg, Scott Speed and Alexandre Premat would all be battling Kovalainen for the inaugural GP2 Series title.

Kovalainen’s sole GP2 campaign began on the 23rd of April 2005 at the Imola circuit in Italy right under the nose of Formula 1.

At Imola, Heikki qualified an impressive fifth for the Feature Race.

As the race progressed car after car began to drop out due to car trouble but Heikki Kovalainen kept composed and consistent to take the win in the season opener at Imola, finishing just ahead of Jose Maria Lopez and Scott Speed.

This great result plus a podium in the Sprint Race would set the foundations for a superb season as the Imola victory would be the first of five race wins for Kovalainen.

Round 2 was held in Spain. The Arden International driver drove a brilliant Feature Race at the Circuit De Barcelona-Catalunya to claim third place. Despite retiring from Sundays Sprint Race, Kovalainen was still top of the standings.

Next up was the showpiece event at Monaco. And in Qualifying, Heikki produced a stunning lap to take pole position ahead of Gianmaria Bruni. In the sole Monaco race Kovalainen drove brilliantly only for a slow pit stop to scupper his hopes of victory and the Finn ended up in fifth.

After Monaco the next three rounds of the GP2 season yielded great success for Kovalainen as the Arden driver stood on the Podium on five out of six occasions.

A win and retirement at Nurburgring was followed up with another victory and a third place at Magny-Cours in France. At Silverstone, Heikki produced a pair of great drives to finish in second and third which meant at the halfway stage of the season Kovalainen found himself at the top of the standings 20 points ahead of Nico Rosberg.

Istanbul Park in Turkey which is a circuit Formula 1 is revisting in 2020 offered an extremely mixed bag of results for Kovalainen.

The Feature Race ended up being pointless as he crossed the line in tenth after a mediocre qualifying. However the Sprint Race on Sunday proved much better for Heikki as he stormed through the field to win a stunning wet dry race. Critically extending his Championship lead over Nico Rosberg to seven points.

As the inaugural GP2 season began to draw to a close we had three rounds left and the Championship was as close as ever. Heikki Kovalainen and Nico Rosberg had been duelling for the title all year and with six races left, Kovalainen was on 93 points just seven ahead of his main rival Nico Rosberg who was on 85.

After the brilliance of the Turkey Sprint Race the Championship momentum was with Heikki Kovalainen as GP2 headed to Monza for the second Italian circuit of the season.

The Monza weekend started well for Heikki as he grabbed pole setting a time two tenths quicker than title rival Rosberg who lined up second.

With just two rounds to go the Championship was finely poised, GP2s next destination was Spa-Francorchamps in Belgium for the penultimate round of the season.

Kovalainen suffered a disappointing Feature Race finishing in tenth place losing more ground in the Championship to Rosberg. The Sprint Race yielded more of the same for Heikki who claimed no points as Rosberg finished fifth taking the Championship lead for the first time.

Heading into the final round of the season in Bahrain, Nico Rosberg held the Championship lead with 102 points just three more than the 99 of Kovalainen.

It was all to play for but Rosberg took pole ahead of Kovalainen who would line up second for the Feature Race. The race itself saw Rosberg take a crushing victory to claim the GP2 Series title. A bitter pill to swallow for Kovalainen who drove so well all season and put in some epic performances.

The Bahrain Sprint Race saw Heikki Kovalainen start in sixth, ahead of Rosberg. The Finns wretched Bahrain weekend would be capped off by a spin on Lap one ending his race early. Rosberg crowned his season with yet another victory in GP2.

After GP2 Heikki Kovalainen would go on to have a lengthy and successful career in Formula One. The Finn would become a test driver for then World Champions Renault in 2006. Heikkis F1 highlight would have to be his Grand Prix victory at the 2008 Hungarian Grand Prix for Mclaren.

Today Heikki Kovalainen is racing in Japan in the Super GT Series at the age of 39. 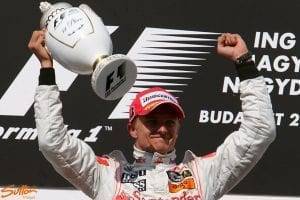