Suzuka, October 5th 2014, was the fateful day, where Formula 2 Graduate, Jules Bianchi, left the track during the Japanese Grand Prix, and came into contact with a recovery vehicle, succumbing to his injuries nine months later.

Wondering thoughts of, ‘what if’ can be crushing if pondered for too long. So a brief tear is permitted, and we continue on in remembering the achievements Jules amounted during his short but significant life.

Bianchi’s racing experience started much earlier than most, having access to his father’s karting track in the South of France.

Every Thursday we’ll put a memory of Jules. Let's start with one of his first times in a go-kart! ? Jules continues to live through his association. Find out more here https://t.co/p1ppfH8W2I pic.twitter.com/UoIHFmtFFz

Signing for ART in late 2007 and working his way through the ranks of Formula Renault Bianchi won the 2.0 title with five race wins in his rookie season.

He continued his success with the 2008 Masters of Formula 3 title at Zolder.

Staying with the team for 2009 he partnered Valtteri Bottas. With an incredible 9/20 wins Bianchi wrapped up the Drivers’ Championship before the final race weekend.

ART promoted the Frenchman to their GP2 Asia team and the main GP2 series in 2010, following Nico Hülkenberg’s deserved departure to Formula 1.

Hülkenberg’s Championship win for the team the previous season saw Bianchi jump into the German’s #1 car.

It was a closely fought Drivers’ and Teams’ Championship with an incredible pool of talented drivers, such as Sergio Pérez, Pastor Maldonado, Romain Grosjean, Marcus Ericsson, and Max Chilton.

He soon stamped his mark on proceedings by finishing third in the Monaco Sprint Race.

He took P2 in the Valencia Feature Race, and a second place in the Feature Race at Silverstone.

His season was briefly affected by a crash in Hungary, that saw him retire from the Feature Race and miss Sunday’s Sprint Race completely.

Initially it was reported he potentially wouldn’t see out the rest of the season because of the injuries he sustained.

Despite his fractured vertebrae he bravely returned the following race weekend at Spa where he finished 14th in Saturday’s Feature Race.

He went on to take the second step at the Feature Race in Monza.

By the end of his rookie season he finished third in the driver standings behind Maldonado and Pérez.

Jules continued with the team in 2011 for a second season, partnering Esteban Gutiérrez.

At the first race of the season in Istanbul he took third place in the Feature Race.

His maiden Formula 2 win came in the Feature Race at Silverstone.

Lap 13 is a flawless example of wheel-to-wheel racing.

He finished second to Roman Grosjean in the Sprint Race at the Nürburgring, narrowly missing out on the win on a slippery rain affected track. He was lucky to finish after Luca Filippi clattered into him in an attempted overtake on the final lap.

Bianchi also took P2 in both the Feature and Sprint Races at Spa.

At Monza he finished P3 in the Sprint Race, securing another third place in the driver standings in an even closer fought season than the previous one.

The Frenchman ended the season an agonising two points behind Luca Filippi. Although he did pip Charles Pic to P3 by just one point.

Bianchi went on to finish runner up in the 2012 Formula Renault 3 series with eight podiums – four points behind Championship winner, Robin Frijns.

Jules had been linked to Ferrari since 2009, testing for them at Jerez. He is considered to be the Driver Academy’s first recruit because the model was built around him and his contributions at that time.

He remained their test and reserve driver, and was loaned out to Force India in 2012 where he completed nine Friday Free Practice sessions.

By the beginning of 2013, he was confirmed as one of Marussia’s main drivers for the team, qualifying 19th and finishing P15 at the Australian Grand Prix.

At Sepang, Bianchi went one better by finishing in 13th place.

It was on the challenging streets of Monaco that saw the Frenchman take the first Formula 1 points for himself and the team.

A day we will never forget.

By this point Jules was more than ready to step into the Ferrari seat should they need his services.

He wasn’t just considered a back-marker, Jules was highly regarded by the paddock and by race fans. His progression into one of the top teams was a much talked about inevitability.

Sadly, Jules’s story wasn’t to continue. On the 5th October 2014, a rain-soaked track in Japan saw a Lap 42 incident that changed the course of Bianchi’s promising destiny.

Adrian Sutil spun and was caught in the gravel trap. The Safety Car was deployed so that the stricken Sauber could be moved. A lap later, Jules left the track in his own incident, and collided with the recovery vehicle.

Following the news of Jules’s passing, the FIA announced his car number would be retired as a mark of respect.

“As F1 car numbers are now personally chosen by each driver, the FIA believes it to be an appropriate gesture to retire Jules Bianchi’s number 17.” – Jean Todt, President of the Federation Internationale de l’Automobile (FIA)

Jules was an incredible talent and was well known and liked throughout the various formulas.

He is missed by many and his spirit lives on through those who knew him.

This was the last photo I took of Jules as we were laughing at each other.

3 years ago we lost a great.

His legacy lives on through these Ferrari Driver Academy prodigies: 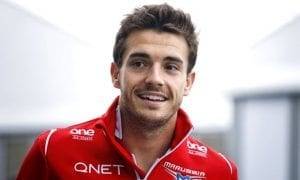