Mick Schumacher is part of the next generation of exciting young talents in Formula 1.

Schumacher performed brilliantly in 2020 taking top spot in F2 and winning the Formula 2 championship for PREMA.

The German driver graduated to F1 for 2021 and joined the American outfit Haas F1 team.

Schumacher enjoyed a magnificent junior career winning the championship in Formula 3 and F2 seeing off fierce competitors such as Dan Ticktum, Guanyu Zhou and Robert Shwartzman on both occasions.

To add to an already impressive CV, the 22 year old also scored a flurry of victories in both the ADAC and Italian F4 championships earlier in his illustrious career.

The Ferrari Academy driver struggled at the opening weekend making a mistake in the Feature Race dropping him outside the points.

Schumacher ended Round 1 with just two points to his name.

Round 2 saw the Red Bull Ring be used again in Formula 2 and fortunately for Schumacher he enjoyed slightly better luck this time around. The PREMA driver scored a solid P4 in the Feature Race and produced some great overtakes in the closing stages.

The Sprint Race didn’t yield the same good fortune for the German, his fire extinguisher accidentally went off. This robbed Schumacher of a potential podium.

After the first couple of rounds Schumacher left Austria with 14 points, floundering outside the top five in the standings. Championship leader Shwartzman had amassed 48 points from the opening 2 rounds.

The next 3 rounds of the 2020 FIA F2 championship saw Schumacher collect a mixed bag of results. Round 3 at Hungary saw Mick surge to a double third place getting his championship challenge back on track.

The German driver kept out of trouble and made clinical passes on the tight and twisty Hungaroring.

Next up, a double header at the blisteringly quick Silverstone circuit in Britain which hosted Round 4 and five of the 2020 F2 championship.

The PREMA driver showed great pace in the Feature Race producing a magic start and taking the lead into Abbey at Turn 1.

Mick’s hard compound tyres faded at the end of the race which meant he dropped back from P4 to ninth place in a matter of just 9 laps.

The second Silverstone event saw him enjoy much better results with the PREMA driver delivering a solid P7 in the Feature Race.

The Sprint Race took an unexpected twist with just 3 laps to go. Mick shadowed Shwartzman for much of the 21 lap event only for the two teammates to collide at Brooklands.

Schumacher eventually ended up with a second place and good points towards his championship challenge.

The next three rounds at Circuit De Barcelona-Catalunya, Spa-Francorchamps and Monza saw the German driver truly hit a magnificent purple patch, he stood on the podium on five out of six occasions.

In Spain, Schumacher scored a P6 in the Feature Race. This solid effort was followed up with a magnificent third place in race 2 for PREMA taking valuable points for the championship.

As the 2020 F2 championship reach its halfway point Mick found himself 5th in the standings and 42 points behind championship leader Callum Ilott.

The Sprint Race was equally impressive, the PREMA driver showed good consistency and claimed yet another podium to add to his tally, scoring P3 at Spa.

Mick was on a roll at Monza producing a magnificent start and beautifully controlling the Feature Race to deliver his first win of the 2020.

This brilliant result was followed up with a satisfying third place in the Sprint Race.

With four rounds to go, Schumacher suddenly found himself second in the championship and just a mere six points behind championship leader Ilott after all his great success in Spain, Belgium and Italy.

As it turned out the result didn’t tell the whole story as all of his main title rivals lost ground to the PREMA driver in Tuscany.

The final three rounds were held at the Sochi Autodrom in Russia. The season was rounded off with a double header at the Bahrain International Circuit which showcased the 3.3 mile and the short, bumpy Outer Circuit.

Russia proved to be a very good weekend for him, he drove a magnificent Feature Race taking his third Formula 2 victory.

After an impressive P3 in the Sprint Race, F2 moved onto the season ending Bahrain double header.

Schumacher produced a montage of crisp overtaking maneuvers on his way to P4 and P7 over the weekend. The PREMA driver took a huge step towards his F2 crown.

Ahead of the final round of the championship the German driver held a slim 14 point lead over his nearest challenger.

The final weekend of the 2020 F2 season didn’t start brilliantly for Schumacher as Ilott nibbled away a two point chunk out of the Germans championship advantage.

The Sprint Race yielded drama at every second of the event as Schumacher locked up on Lap 1 causing a huge flat-spot on his right front Pirelli.

The drama continued on the first lap as Schumacher nearly collided with his title rival Ilott.

The PREMA driver eventually claimed the title at the end of a brilliant season of Formula 2.

For 2021 Mick was rewarded with a Formula 1 drive with Haas F1 team. The Haas car seems to be one of the backmarkers but the 2020 F2 champion has shown good speed and a calm head in his debut F1 season. 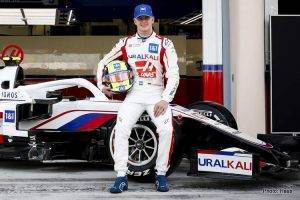