The name Nico Rosberg is one well known in the world of motorsport. Not only was he a GP2 graduate, but also one of the most successful drivers that made the move into Formula One.

In the early days, German born Rosberg used Formula BMW and then the Formula 3 Euro series to hone his skills before joining the inaugural GP2 series in 2005.  He was initially signed up at BCN Competición, but then ultimately made a deal with French team ART where he partnered Alexandre Prémat for the 2005 season.

The GP2 series was formed to make racing more affordable for the teams and to make it a better training ground for drivers to make the jump into Formula 1. All teams were required to use the same chassis, engine and tyre supplier so that the emphasis would be on driver ability.

The 2005 season kicked off at Imola where Rosberg claimed the final point of the inaugural race by finishing in 8th position. In the early part of the season Heikki Kovalainen was the man to beat after he won three of the first five feature races.

Rosberg had a slow but consistent start to the season and then picked up a podium in Monaco where he ended the race just one second behind race winner Adam Carroll. Rosberg then backed up the Monaco result with another podium at the Nurburgring.

At the Magny-Cours round, Rosberg had his best qualifying performance to date when he lined up on the second row. He was in a strong position in race one but some tactical errors cost the team a possible win.

Rosberg didn’t have to wait long to taste the winners champagne as he drove a faultless sprint race the following day to take a dominant 25 second victory and the first of his GP2 career.

Brimming with confidence from that first victory, he continued that form when he took the chequered flag first in the features races at Silverstone and Hockenheim. The championship standings after the Hockenheim round saw Kovalainen holding onto a six point lead over Rosberg with Scott Speed in third.

Drama unfolded at the next round in Hungary after Rosberg qualified on pole. A post-qualifying inspection exposed a steering rack irregularity in both ART cars causing both drivers to be demoted to the back of the grid. In the race, Rosberg worked his way through the field to finish an impressive fifth while championship rival Kovalainen ended in second.

The sprint race was a clean sweep for the ART team when Alexandre Prémat claimed his first GP2 victory with Rosberg close behind in second. At this point Kovalainen and Rosberg were trading punches with consistent results leaving the championship on a knife edge for the remaining three rounds.

Kovalainen claimed the feature race win at Monza while Rosberg finished second in both races and gained extra points for the fastest lap in both.

Some bad luck unfortunately struck Kovalainen at the penultimate round at Spa-Francorchamps when he spun off on the last lap of the feature race while fighting for eighth. This would hand Rosberg the championship lead for the first time in the season.

The seesaw battle continued with Rosberg holding a slender five point lead in the drivers’ championship when they arrived at the final round held in Bahrain. With 22 points still up for grabs, it was sure to be going down to the wire. Qualifying saw the two protagonists qualify in first and second respectively.

Rosberg went on to win the feature race and in so doing claim the inaugural GP2 championship. Buzzing with confidence, he would then go on to win the sprint race to become the first driver to win both races at a GP2 race weekend and prove that worthy championship status. On route to the title Rosberg claimed five wins with a total of twelve podiums.

Rosberg’s impressive GP2 championship performance led to a race seat at the Williams Formula One team for the 2006 season. After a few years at Williams finding his feet, he would eventually join the Mercedes Formula One team.

He finished runner up twice behind Lewis Hamilton before finally securing his maiden Formula One World title in 2016. By reaching his dream there was nothing left to prove and he announced his retirement five days after winning the F1 title. He remains as one of the most successful and popular drivers to have come through the GP2/Formula 2 ranks.

Watch the final two races in the GP2 season: 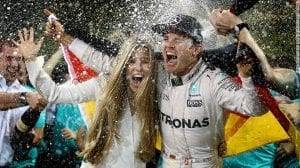