Gasly made his debut in the championship for Caterham Racing in the final three rounds of the 2014 season. The six races at Monza, Sochi and Yas Marina saw him fail to record a points finish.

After taking part in pre-season testing, it was announced he would be competing with compatriots DAMS for the 2015 season.

It was a mixed season for the Red Bull Junior driver. The opening weekend in Bahrain saw him qualify in ninth but was forced to retire from the Feature Race after Arthur Pic’s car was spun into him.

Spain saw him put in a strong qualifying to start third and take his maiden podium with third in the Sprint Race.

Three rounds later in Silverstone he recorded his best finishes so far with fourth in the Feature Race and another podium in third.

Two consecutive retirements followed in Spa and Monza, before his final podium of the season in the Sochi Feature Race.

The season was capped off with a spin at Abu Dhabi, which resulted in a multiple car collision and the race was cancelled as a result of damage to the barriers.

Gasly finished the season eighth in the standings on 110 points, 231.5 points behind series champion Stoffel Vandoorne.

2016 saw Pierre Gasly join newcomers PREMA alongside Antonio Giovinazzi. The season opener in Spain saw him achieve his first pole position and back-to-back podiums with third in the Feature Race and second with the fastest lap in the Sprint Race.

A difficult weekend in Monaco followed, where he failed to score points, before the Sprint Race in Baku saw him return to the podium in second.

Heavy rain in Austria caused Gasly to spin out of the Feature Race lead. However, his title campaign truly got started in Silverstone.

After qualifying in second, the Feature Race saw Gasly adopt the alternate strategy with an early pit stop and storm his way to his first GP2 win.

This was followed by pole position in Hungary and his second win of the season in the Feature Race. After finishing seventh in the Sprint Race with the fastest lap, the PREMA driver took the GP2 championship lead.

In a rather unusual incident, Gasly was disqualified from the following race in Germany, after initially finishing third, due to his fire extinguisher emptying during the race.

Belgium saw the Frenchman bounce back and take his third victory of the season, with a dominant display in the Feature Race, 11 seconds ahead of second place Jordan King.

He continued to lead the championship after another strong showing in Monza, where he took pole position once again and finished in fourth and second in the Feature Race and Sprint Race respectively.

The penultimate round in Malaysia presented a weekend of mixed fortunes. Pole position in qualifying was followed by a failure to score in the Feature Race. This was quickly rectified by third and the points for fastest lap in the Sprint Race.

Gasly could not have got his final weekend in GP2 off to a better start, taking pole position in Abu Dhabi.

His weekend improved further after taking his fourth win of the season in the Feature Race. His failure to score in the Sprint Race the next day did not matter, as title rival and team mate Antonio Giovinazzi only managed to finish in sixth.

Pierre Gasly took the GP2 Drivers’ title with 219 points, eight points ahead of Giovinazzi and helped to secure the Teams’ title for PREMA in their maiden season.

Despite his championship victory, Gasly was not immediately given the promotion to Formula 1. Instead he competed in the 2017 Super Formula Championship in Japan, where he finished second and made a one-off appearance at the New York ePrix in Formula E.

However, after former Red Bull driver Daniil Kvyat suffered a poor run of form, Gasly made his Formula 1 debut in the Toro Rosso (now AlphaTauri) for the 2017 Malaysian Grand Prix, before replacing him for the remainder of the season.

A strong season in 2018 saw him earn the promotion to sister team Red Bull Racing. Nevertheless, a difficult first half of the season saw him replaced by Alex Albon and return to Toro Rosso mid-season.

The 2016 GP2 champion might have been down, but he certainly wasn’t out, especially after the tragic loss of his longtime friend and Formula 2 driver Anthoine Hubert.

2020 has only seen him grow in confidence and to cap off the turn of fortunes, he took his first Formula 1 victory by winning the Italian Grand Prix. He became the first French driver to win a Formula 1 race since Olivier Panis, 24 years earlier.

It is rumoured that a return to Red Bull could be on the cards. One thing I am certain of is Pierre Gasly, whether it is in GP2 or F1, has been and always will be one to watch. 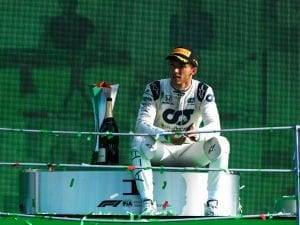