We had the great fortune to spend a little bit of time with the Formula E & 3x Le Mans 24h Champion Sébastien Buemi to discuss his #RoadtoF1 and the initial climb from the GP2 into Formula 1.

When the 2008 Formula 2 season rolled around on the weekend of 26-27th April at the Circuit of Catalunya hopes were high that another graduate of GP2 would land a seat in Formula 1 for 2009.

Amongst those lining up in the twenty-six cars for that season included seasoned veterans like Giorgio Pantano, Vitaly Petrov, and Andres Zuber, along with sophomores Bruno Senna and Karun Chandhok.

The rookie class was strong as well with future series champions Davide Valsecchi and Romain Grosjean making their debuts along with the 2007 Formula Renault 3.5 Series champion Alvaro Parente adding further spice to a stacked rookie class.

Swiss hotshot Sébastien Buemi had received a baptism of fire of a GP2 debut in 2007 with his first GP2 race happening at Monaco.

“I was replacing Michael Ammermuller who broke his wrist at Bahrain so he couldn’t drive and because Red Bull had the seat and at the same time I was racing in Formula 3 euro series so I got the call up for Monaco.”

”As you can imagine I had never driven a GP2 car and I had never visited Monaco or met with the ART team, and you arrive in the middle of the championship and I tried to do my best and it ended up being a strong start.”

Despite being a newcomer to the streets of Monaco Buemi shined with second in practice and fourth on the grid for his maiden race.

But issues with the clutch cost Buemi positions at start however he still managed points with seventh on his debut race weekend.

”I was second in practice, fourth in qualifying and seventh in the race because I had a bad start as it was my first time using the clutch on the steering wheel which I couldn’t practice much so the start wasn’t great but the race was ok”.

Buemi would get another points finish with seventh place in the Feature Race at Monza.

Despite not knowing some of the tracks Buemi finished second in the championship to Grosjean taking a win and four second places.

”If you wanted to do a very good job in Europe you had to start off in the Asian series even if the car was different to the European one as we were going to get a new car for Europe meaning we had to use the first generation car for Asia”.

”In the end I finished second in the championship it was a very difficult start but it got better and better and I thought it was quite cool to race with F1 in Malaysia and Bahrain and it also meant I could get used to the starts and the tyres.’

When the series returned to Europe Buemi scored two podiums but him and his Arden team had issues with the new car,

”We were strong in GP2 Asia but we weren’t as strong with the new car, it all depended on how your team got used to the new car and how they got the most out of it, and although Arden did ok with the new car we did better with the old one”.

When the series reached Magny Cours Lady Luck finally gave Buemi a visit where he took his first Feature Race win after a stunning drive from the back of the grid.

Despite that win in Magny Cours Buemi’s title push took a knock at Hockenheim after retiring from second place after a costly error at the Sachskurve.

”The DNF in Hockenheim was very bad as I was running in second and I went off at the Sachskurve because it was starting to rain and Grosjean in front had a penalty so if I had just driven around for the last two laps and not ended up in the gravel I would have won the race and that would have completely changed the championship.”

”It’s big regret as it cost me a lot of points”.

Although Buemi only finished sixth in the championship with another win in Budapest he caught the eye of employers Red Bull who promoted him to third driver for 2008.

With David Coulthard retiring from Formula 1 at the end of the 2008 season which saw Toro Rosso’s Sebastian Vettel get promoted to Red Bull leaving a seat available at Toro Rosso.

It would come down to a shootout at Barcelona with Buemi going up against Japanese veteran Takuma Sato for the second Toro Rosso seat.

”With Vettel getting promoted to Red Bull they had room for another driver, so I had a shootout with Taku and we had a few tests against each other in Barcelona and I did a good job and that’s what I think made them think that I deserved the drive’’.

On the 9th January 2009 three months shy of the season opener in Melbourne Buemi was confirmed at Toro Rosso where he would last two seasons at the Faenza team before having a very successful career in Sports Cars and Formula E.

Thank you Sébastien for your time speaking with us here at insideF2.com. 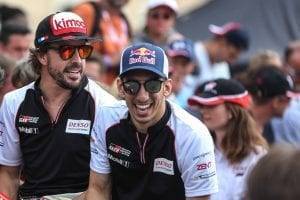