As a Formula 2 Graduate, Sergio Pérez seemed the likeliest of candidates to make it to the elite ranks of Formula 1.

In just his third successful year of Karting he became the youngest driver to win the 1998 Championship.

During his first attempt at the British Formula 3 series in 2007 he dominated the season to become the Champion, following in the footsteps of Jackie Stewart and Ayrton Senna.

By 2008 he was promoted to GP2 Asia Series, joining the Campos team. Partnering Vitaly Petrov and rivalling Nico Hülkenberg.

He repeated the win in Qatar the following race – finishing seventh overall in the standings out of 40 classified drivers.

Just one year later the opportunity to move into GP2 came through Arden. The Mexican driver’s #RoadToF1 ambitions were becoming a reality.

Sergio recently explored his memories from that pivotal time, he said:

“It was good: a nice feeling because you’re thinking that is just one step between you and your dream of becoming a F1 driver.”

This brought the Mexican closer than ever to the elite Formula 1 circus. Participating in support races at the same circuits made the dream so much more real.

I asked if he remembered the excitement and anticipation of moving into GP2:

“Yes of course, those cars were very quick, and to have the chance of driving every weekend alongside the F1 was very exciting for me as for any young driver.”

Moving to Arden for the 2009 GP2 series, Pérez had an even better season.

He finished 12th overall and secured two podiums in the Feature and Sprint Races in Valencia, in a season dominated by Hülkenberg.

The Mexican reigned in the Principality that season.

It was a deserved maiden win on the tricky streets of Monaco.

Sergio made immediate reference when I asked what his most memorable race was:

“Definitely it has to be Monaco, in my second year.
Was a great race starting from second and taking the lead at the first corner. To be the first Mexican ever to get a win there is something really special for me. This came after a very unlucky weekend in Spain the week before. My family was also there, so it was really one of the most special moments not only of GP2, but of my entire driving career.”

Silverstone was as impressive.

Taking two positions in the initial phase of the Sprint Race, Pérez edged over 1s a lap faster than the rest of the field on almost every lap, winning the race an incredible 15.7s ahead.

In Round 6 at Hockenheim, Pérez took a Lap 10 lead and didn’t look back. He won comfortably by over 6s.

Spa saw Pérez start second on a reverse Sprint Race grid. On Lap 1 he took P1 with ease and retained the position until the chequered flag, despite three Safety Cars.

The final race of the season saw the Mexican qualify in third. He won the Feature Race by an epic 21 seconds.

The 2010 GP2 season had an abundance of highly skilled drivers, including Bianchi, Roman Grosjean, and Marcus Ericsson, to name but a few – thus Sergio’s P2 being that much more impressive.

When I asked Sergio if he had any unforgettable experiences from GP2, he expressed the bonds that are formed in the feeder series:

“I loved to be with the guys, sharing the same dream. The ambiance was great, so probably I’ll say that was it.”

Getting his big break with the Sauber team in 2011, Pérez was the first driver from Mexico to participate in Formula 1 since 1981.

He finished 16th out of 28 classified drivers.

The ‘Mexican Wunderkind’ made his mark early in the 2012 Formula 1 season, securing his first podium in Race 2.

Pérez looked set to win the race at one point after pitting earlier than most of the field for wet tyres. He finished a close 2.263s off race winner, Alonso after catching the Spaniard.

The close victory was an outstanding achievement for the Formula 2 Graduate, who was establishing himself amongst the big boys.

During his second season he enjoyed a P3 in Canada and P2 in Italy; It’s no surprise the top teams took an interest.

With a 2013 stint at McLaren, Pérez joined Force India in 2014, that subsequently became Racing Point, and the rest as they say, is history…

Pérez has gone on to have a very respectable career. He is well liked in the paddock and it is clear to see why, when he generously gives his time professionally and personally.

Establishing the Fundación Checo Pérez in 2012 for Mexican orphans and children with cancer, this year the foundation donated ‘pantries’ for families affected by Coronavirus.

Sergio’s even taken a moment to say a kind word to the next generation of Formula 2 Graduates, Mick Schumacher, Robert Shwartzman and Callum Ilott, as they embark on their own journey into a possible F1 future:

“Well, that’s something always special, so my advice is: Enjoy the moment. It’s a big jump to the big leagues, and it will happen only once. F1 it’s a completely different world and it’s not easy. So they have to be fit, physically and mentally.”

Sergio is currently fifth in the F1 driver standings, with a realistic opportunity to finish in P4.

We here at insideF2 wish him the very best of luck this season. 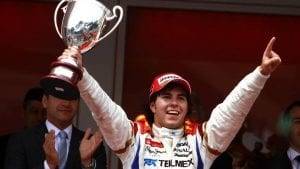