The challenges of racing in Europe after a spell racing in America can sometimes make a return a success or a disaster.

Some have the success of Juan Pablo Montoya and Jacques Villeneuve and succeed in Formula 1 whilst some like Michael Andretti and Sebastian Bourdais fail to hit the ground running and head back to the US afterwards with their tail between the legs.

Timo Glock was trying to become a member of the former category when he arrived back in Europe in 2006 after a spell in Champ Car and Formula 1, with Glock going to GP2 as a potential springboard for another shot at Formula 1.

Timo signed for BCN Competition for the 2006 season, however, the first five weekends of the season started badly for Glock who could only manage a best finish of fourth place at Imola as Lewis Hamilton started to take charge in the championship race following three wins.

By the time the series reached Silverstone Glock had left BCN to join Isport and replace the floundering Tristian Gommendy, who had struggled in the first five rounds of the season with Luca Filippi heading to BCN to replace Glock.

The change in fortune was immediate as Glock took his first podium for Isport, behind home hero Hamilton with the German then winning in Magny Cours and Hockenheim on his way to finishing fifth in the championship.

Glock and Isport stayed in partnership for 2007, with Andreas Zuber arriving into the team replacing EJ Viso.

The season started well for Glock with a win at Catalunya before a third place at Monaco which saw him take a sixteen point lead ahead of rival Filippi into Magny Cours.

The run of podiums ended in Magny Cours when Glock and Zuber were involved in a startline incident that saw both cars eliminated.

A red-flag came out after Viso somersaulted through several advertising hoardings which were reminiscent of the late Marco Campos’s fatal accident twelve years earlier.

Glock’s poor luck continued with another DNF at Magny Cours and a double DNF at Silverstone bringing Lucas Di Grassi within two points of Glock’s lead in the championship as they headed to the Nurburgring.

The German bounced back perfectly with a win from pole ahead of rival Di Grassi before finishing ahead of the Brazilian in the sprint race to take Glock’s lead up to seven points.

That lead was then cut back to one as Di Grassi fought back at the Hungaroring as Glock failed to score again as Di Grassi managed a pair of fourth places.

The two then traded race wins in Istanbul with Di Grassi winning the feature and Glock winning the sprint with the German extending his lead to two as Di Grassi could only manage eleventh in the sprint.

With three rounds to go Glock had a perfect weekend at Monza with a third in the feature before taking his fourth win of the season in the sprint to extend the championship lead to eleven points. This left him ahead of Di Grassi who had a tough weekend, after a late retirement with just two laps left to go in the feature race.

Inbetween what was a scintillating championship fight Glock was attracting a large amount of attention from Formula 1 teams with Toyota and BMW Sauber keen to chase his signature for the 2008 season.

But just as it seemed he had a hand on the championship, Glock had the weekend from hell in Spa. He finished with an eighteenth place in the feature race and a did not start in the sprint caused by an unusual incident with Ricardo Risatti on the way to the grid.

The result of this saw Glock’s championship lead melt away from eleven points to two, Di Grassi scored a pair of third-place finishes.

It would all come down to the final round of the season in Valencia and it was Glock who got an early advantage with second on the grid alongside rookie Kazuki Nakajima with Di Grassi only managing seventh.

In tricky wet-dry conditions for the feature race, there was very early drama as Di Grassi spun into the gravel trap on lap five beaching his ART machine and with it gave Glock breathing space as he managed seventh.

It would all come down to the sprint race, with Di Grassi starting twenty-third on the grid Glock just had to finish and hope Di Grassi didn’t get any points for him to seal the championship.

However, Glock would win in style with a light to flag victory to seal his fifth win of the season and with it Isport’s first constructor’s championship ending ART’s run of two consecutive titles.

Redemption was finally confirmed for Glock just two months after his title victory when he signed for Toyota for the 2008 season replacing compatriot Ralf Schumacher with Toyota boss Tadashi Yamashina praising his race craft and fighting spirit.

In his maiden season at Toyota Glock managed a second in Hungary before scoring two more podiums in 2009 before the Japanese manufacture pulled out of F1 with Glock driving for Virgin for three more years.

The German would go on to have a long career in motorsport in the DTM. He is still active in the Deutsche Tourenwagen Masters racing with BMW Team RMG. 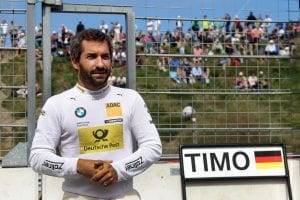