Tomas Enge made history as the first Czech to race in F3000 giving the country it’s first topline driver who could compete with the best up and coming talent of the time.

The Czech driver had started his racing career relatively late at the age of sixteen in the Ford Fiesta Cup in the Czech Republic before moving up the junior ladder to Formula Ford and Formula 3.

“It was a bit of a disadvantage starting a little bit later when guys who I was racing against for example Nick Heidfeld had started in go-karts and I was with him in the same team in Formula 3 and Formula Ford and I could tell he had more experience but it didn’t stop me beating those guys who had more experience.”

Enge made his F3000 debut at Hockenheim replacing Northern Irishman Dino Morelli with the Czech thrown in at the deep end with Hockenheimring being the fastest circuit on the F3000 calendar.

“For me, it was like being thrown into freshwater as I need a change because I wasn’t successful in Formula 3 as the cars didn’t have enough power for me as you needed to drive smoother and I just wanted a car with more power.”

“I didn’t have a successful 1997 so I tried to find a new challenge in 1998 and I did one short test before heading straight to the old Hockenheim which was the fastest track on the calendar and it was great”.

1999 saw Enge move to the WRT-FINA team however the season started disastrously with two failures to qualify in Imola and Monaco.

“We had to pre-qualify for the first three races as we were a new team, it was a new car for everybody and everything changed when we went onto the tracks that suddenly suited our car and me”

“I finished second to Nick Heidfeld and the feeling at the time was indescribable it was fantastic knowing we could deliver a fantastic result however after that we didn’t get into the points again.”

2000 saw Enge take Heidfeld’s place at the West Competition team as the German moved up to Formula 1 with Prost Grand Prix. However, Enge had a testing season with the high point being a maiden win at Hockenheim.

“The confidence was there because I had a season behind me and I knew all the circuits and I had established myself in the F3000 paddock and I was coming to the defending champions alongside Stephane Sarrazin however after Nick had left the team for some reason we didn’t have the pace unlike in previous years.”

“Hockenheim was an incredible feeling especially knowing that I won the race doing an overtake that normally no one would do as we started in the rain on a drying circuit and I was leading and my tires were sliding and I knew I had to do something because Scheckter was catching all the time.”

“I made a pitstop for slick tires even if the team didn’t want me to come in which wasn’t helped by a radio issue so they couldn’t hear me, and I came in for a stop came out, P4 with three laps to go and I passed Scheckter on the last lap so it was an incredible and emotional victory”

2001 saw Enge move to Nordic Racing to partner the late Justin Wilson with the Czech taking two more wins on route to third in the championship as teammate Wilson took the title.

“The atmosphere in the team was fantastic it was almost like a family and we had a fantastic year me and Justin, Justin was a great friend even though we were fighting each other for wins but he was fair however he had a little sociological edge over me maybe because he was in a British team and he felt at home and made fewer mistakes whilst I made more”.

That same season saw Enge make more history when he became the first Czech to race in a Grand Prix after being called up by Prost to replace the injured Luciano Berti for the final three races of the season.

“It was an incredible feeling being the first Czech in Formula 1 and it was a dream come true,  the first race was at Monza shortly after September 11th so the atmosphere wasn’t great, but my focus was on the race and I did really well at the time and from there we went to Indianapolis and Suzuka were the results weren’t as good, sadly it was a short visit in the F1 paddock but I enjoyed it and I always will remember it.”

Enge did have an option to drive for the team the following year, however, over the winter Alain Prost lost the battle to keep his team afloat and the team went bankrupt in late January.

With no F1 drive for 2002, Enge returned for another shot at F3000 where he took a further three wins in what was his best season of F3000 as he fought for the title along with Italian Giorgio Pantano and Frenchman Sebastian Bourdais.

Enge won the title on the road at Monza but that weekend saw the news break at he had failed a drug’s test after his win in Budapest testing positive for Marijuana, the FIA then stripped him of the title days later in a court hearing giving Bourdais the title.

“Well I won the title on the road so for me I felt like I was the champion but it was painful losing the title”.

“The title battle was fantastic, it was a great battle, Pantano was a great friend and a funny guy like I was so we were always joking together but Bourdais was very different and very quiet compared to me and Giorgio.”

“The battles on track at time was at times a little too hard and with the limited amount of races during the year we couldn’t afford a mistake or a retirement, one of us either had a victory or hit trouble that year and that led to their only being a few points between the three of us.”

Despite a year away, Enge returned to F3000 in 2004 with the new German Ma-Con team finishing a respective fourth In the championship with three podiums.

“Everything was new that season so I became the team leader and sometimes we struggled with the lack of experience and although we got good results we couldn’t fight with Arden and Coloni.”

The Czech left the series the following year to go to Indycar and sportscar racing, however, the Czech has fond memories of his time in F3000 which saw him leave the series with fifty-eight starts, six wins and sixteen podiums to cap off a glittering five-year career in F3000.

“All the guys, I worked with the team owners the mechanics all the people around me, I know everybody in the paddock and I met a lot of friends in the paddock so that’s was my best memories.”

Enge now runs his own racing team in his native Czech Republic and now coaches young talent to follow in his footsteps.

Related to this Author

F1 miles for both Armstrong and Shwartzman

Carlin Top Championship After Round One 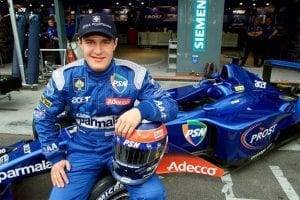