When Jarno Trulli left the Formula 1 grid at the beginning of the 2012 Formula 1 season it ended a forty-three-year run of an Italian driver appearing on the starting grid of a Grand Prix.

The hunt for the next great Italian talent began then, in 2016 Antonio Giovinazzi made a bid to break the drought when he arrived in GP2.

Giovinazzi came into the series off the back of a successful junior career which included a win at the 2015 Masters of Formula 3 at Zandvoort.

“Of course, Formula 3 is completely different from Formula 2, not just in terms of the cars but in terms of the race weekend as it’s one session then straight into qualifying. It was a big jump I would say, after fighting for the championship in Formula 3.”

“It was a good move to go to GP2, I was also looking forward to going to GP2 with Prema as it was a new team coming into GP2. The year before I was fighting against PREMA in Formula 3 and I knew I was in the right place.”

Giovinazzi would be paired up with Frenchman Pierre Gasly who would be starting his second season of GP2, giving Giovinazzi some help on how to handle the Dallara GP2/11

The start of the 2016 season, however, was a struggle for the Italian with no points from the first four races of the season.

“It was not a nice start to the season, not a great weekend in Barcelona, then Monte Carlo which started well but was ruined by a brake issue in the Feature race. That meant starting last for the Sprint, once you start last in Monte Carlo it’s difficult to recover.”

The Italian quickly rebounded with a double on the streets of Baku in the series’s maiden visit to the Azerbaijani capital. Giovinazzi won the Sprint race from last after engine issues.

“I quickly found my pace in Baku. For me, it was the best weekend of the season with two wins and the pole. After that weekend something in my mind clicked, I was fighting in every race for a podium or victory.”

Silverstone saw Gasly taking wins in Silverstone and in Hungary, whilst Giovinazzi kept up the pressure with a pair of second-place finishes.

After the summer break, Giovinazzi took a vital win in the sprint race at Spa. However, when the series got to Monza he suffered a major setback after being excluded from qualifying for illegal tire pressures.

Despite starting last Giovinazzi drove arguably his best race of the season winning at home from twenty-first on the grid in front of his home crowd. The driver becoming the first Italian to win during the Italian Grand Prix weekend since Luca Filippi and Davide Valsecchi took a pair of wins in 2012.

He talked of the joy on the podium after what had been such a challenging start to his weekend.

“I still remember that day, I was coming into the weekend after a great win in the Sprint race at Spa. I knew that I had all my fans and family heading down to Monza in support of me, it being a critical part of the season.”

“Then on Friday, we got thrown out of qualifying because of tire pressures. I went from second to twenty-first for a Feature race. It wasn’t a great Friday night, I can remember being really angry but then on Saturday everything changed.”

“It was a great comeback from last to first, to stand on top of the podium in front of the Tifosi and family made it such a special moment.”

For both drivers, there was the added pressure of having the eyes of the Formula 1 paddock on them with Gasly heavily linked with a race seat at Toro Rosso. All the eyes focused on Giovinazzi as he was linked with a Ferrari their test / third driver role.

Qualifying saw Gasly strike first blood with pole position, Giovinazzi on the other hand was only sixth on the grid. This gave him plenty of work to do for the Feature race.

Making matters worse Gasly won the Feature race, a twelve-point cushion for the final race of the season. Giovinazzi had to finish at least second and hope that Gasly had a poor Sprint race to stand any hope of winning the title.

Despite Giovinazzi’s best efforts it wasn’t to be as the Italian could only manage sixth, giving Gasly the title by eight points.

“Unfortunately, for myself, it wasn’t a nice weekend and it was a great one for Pierre. I lost the championship by eight points after putting all that work in during the season it wasn’t nice to lose it at the last race of the season.”

It’s perhaps unsurprising that despite the last day championship defeat, Giovinazzi still has trouble to this day picking a favourite moment from the 2016 season.

“I’ve been asked this question many times, I cannot answer, Baku was my first victory and I won from last at Monza as well in my home Grand Prix which was really special. It’s always nice when you win a race and so I can’t choose just one.”

“The biggest lesson I learnt from GP2 was to never give up and always think positive.”

Over the winter of that year, Giovinazzi got that long-awaited call up by the prancing horse confirming him as their third driver.

In 2017 the Italian would be called up by Sauber to replace the injured Pascal Wehrlein. In late 2018 he would then go on to get a full-time drive with the team. His performances good enough to see him kept on for 2020 and 2021 alongside Kimi Raikkonen.

Thank you to Alfa Romeo ORLEN Racing and Antonio for their time. We wish him all the best.

If you enjoyed our look back at our Graduates and their #RoadtoF1, check out our features section for more. 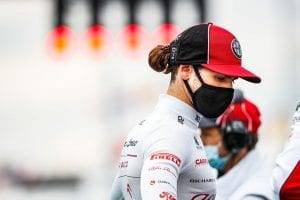