The final day of this week’s testing saw a break in the cool weather to provide some warm track time.

The overall fastest time of the day fell to championship leader Felipe Drugovich with a 1:27.529.

The session provided us with some very quick times under the morning sun, initially, we saw Carlin’s Liam Lawson complete a 1:27.888.

This set the benchmark for the rest of the morning for drivers to beat. All drivers put on brand new soft tyres to punch in some qualifying representations.

Both PREMA’s came close to matching that with Hauger off by -0.057 and Daruvala by -0.074. Lawson did manage to shave off .057 off his initial lap before Brazilian Drugovich punched a 1.27.5 in.

This would prove to be the quickest lap of the day and the test.

Jack Doohan finished the session just behind the front two with a 1:27.838, having completed 50 laps.

The second session of the day was delayed slightly for some maintenance work on the track, this slightly impaired the team’s work on the long race runs.

With the fuel up and the track fully rubbered in, it was Estonian Vips who delivered the fastest lap of the afternoon with a 1:29.888.

The session had a few stops with top man Vips being one of those, following a stop at Turn 3 late on. The others came from Frederik Vesti and Dennis Hauger with what appeared to be engine issues.

VAR’s British driver Jake Hughes came closed to Vips with a 1:30.802, followed by a former F3 teammate Enzo Fittipaldi, in his Charouz having clocked in a 1:31.633.

ART’s Theo Pourchiare completed the most laps with 46 in the afternoon. While technical issues hampered both Dennis Hauger and Marino Sato, both drivers completed only 17 and 19 laps each.

We look forward now to the next round in Imola, Italy next weekend. 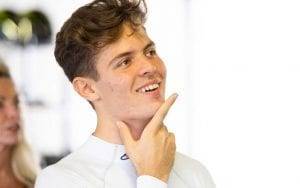