Roy Nissany in his DAMS car finished on top of the standings for the second day of testing in tricky conditions. Following on from less than perfect weather on day one, we saw a cold and wet second day of running.

Similar to the first day it looked like the weather would impact the morning session, however, the looming rain and clouds held off to allow the teams and drivers to get on track and put in some decent Pirelli aided rotations, with Charouz Racing System’s Enzo Fittipaldi completing 52 laps.

The morning was full of stoppages with Marino Sato’s Virtuosi stopping on the straight early on, followed by some Turn 5 incidents involving Iwasa, Hughes, and Caldwell separately throughout the session.

Despite these issues, it was Trident’s Richard Verschoor who posted a 1:29.328 on hard tyres to set the benchmark.

Nissany, not only overtook the Dutchman’s time but also piped his DAMS teammate, Iwasa, down to third.

The Circuit de Barcelona-Catalunya finally got the rain that had been looking likey in the morning, with it bringing a halt to most of the session.  Unfortunately, the rain was not quite enough for wets and not dry enough for slicks.

Aside from the weather, the only stoppage came midway through the action with Calan Williams coming to a halt at the final corner, bringing out the session’s only Red Flag.

It was New Zealand’s Marcus Armstrong that set and maintained the session’s fastest lap with a 1:29.752. This came at the expense of teammate Vips and championship leader Felipe Drugovich.

Carlin’s Liam Lawson and Logan Sargeant both finished in the top 10 having both posted 49 laps.

The final day of testing at Barcelona will kick into action at 9 am local time.

We look forward now to the third day at the Circuit de Barcelona-Catalunya. 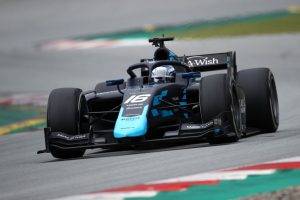