FIA Formula 2 returns at the Bahrain GP this weekend after 2 months away for what could be a thrilling double-header to decide who wins the F2 Championship and who makes the step up to Formula 1 next season.

What is on the line.

Mick Schumacher currently leads the F2 championship on 191 points. A lead that Schumacher gained from his overtake on Yuki Tsunoda in F2’s first race at the Russian Grand Prix back in September. But Schumacher only has a 22 point lead over nearest championship rival Callum Ilott and a 44, 46 and 51 point lead over the chasing pack of Tsunoda, Christian Lundgaard, Robert Shwartzman and Nikita Mazepin.

So, with a maximum of 48 points available over the course of what could be an unpredictable F2 race weekend, the F2 Championship title is still there for anyone’s taking if Schumacher is not able to hold a 49 point advantage after the first race weekend at the Bahrain circuit.

An F1 seat next season.

F2 has been the feeder series for Formula 1 since 2005 when the series was then known as GP2. It is common for the winner of F2 to immediately land an F1 seat for the following season since they have displayed the talent required for a championship and are ineligible for another F2 season.

But seats in F1 are hard to come by and the only team to have both their seats available for the 2021 season are Haas who announced during F2’s break that both current drivers Romain Grosjean and Kevin Magnussen are not to be driving in the two seats for Haas next season.

Although there has been no confirmation yet from Haas on their 2021 driver line-up. The likelihood is that Schumacher may not need the F2 title to earn an F1 seat as the 21-year-old is strongly backed by Ferrari- the team where his father Michael Schumacher won six of his seven F1 titles at. And as Ferrari power Haas’ engines, Schumacher is the front runner to land a seat at Haas in 2021 over fellow Ferrari Academy youngsters and Championship rivals Ilott and Shwartzman.

Formula 1 is a sport where financial backing is king. And any F2 driver that can bring plenty of financial backing with them is vital for an F1 team like Haas who financially compete towards the lower end of the F1 grid. Hence why it also looks very likely that Mazepin would not have to win F2 to be given an F1 seat alongside Schumacher next season at Haas because of his impressive and plentiful financial backing.

Despite Callum Ilott having one more win than Schumacher this season in F2- 2 Feature races and a Sprint race,- the Briton who is a year older than Schumacher, may be the one finding it hard to obtain a seat in F1 next season.

Having previously been a part of the Red Bull Junior Programme and now the Ferrari Academy, winning the F2 championship would benefit Ilott the most as it would certainly give Ferrari, Haas and other teams something to think about, with the only other realistic seat available on the grid in 2021 being at AlphaTauri who look set to be releasing Daniil Kvyat from his F1 seat at the team next season.

But Ilott would be competing with Tsunoda who is backed by Honda- Red Bull’s/AlphaTauri’s current engine suppliers until the end of 2021 season. Tsunoda has also recently tested for AlphaTauri with the only obstacle in the way of Tsunoda’s F1 seat at AlphaTauri being Tsunoda’s Super-License points which a third-place finish in F2 after the double-header season finale at the Bahrain circuit would secure for Tsunoda.

An opportunity for some of the F2 grid to begin to impress F1 teams for their 2022 seats.

As F1 begins to introduce cost measures such as salary caps and engine specifications to make the sport more sustainable, financially viable and competitive for teams towards the back of the F1 grid like Williams, Haas and Alfa Romeo over the coming F1 seasons.

F1 teams have given practice sessions at the season-ending Abu Dhabi GP as a chance for F2 drivers to impress and to begin to stake a claim for the 2022 F1 seats. With F2 drivers including Shwartzman who looks likely to stay in F2 next season, having this opportunity, alongside Lundgaard who had his opportunity to test with Renault during F2’s break at the Bahrain circuit.

A test of nerves and talent.

With the unpredictability of F2, if Mick Schumacher is not able to hold a 49 point advantage and if Callum Ilott along with the chasing pack make significant ground on Schumacher’s championship lead at the end of this weekend, then the F2 Championship title will be decided on what may be a tense F2 race weekend finale next weekend at the Bahrain double-header. Which the majority of F2 and F1 fans would enjoy seeing after waiting 2 months for F2 to make a return. 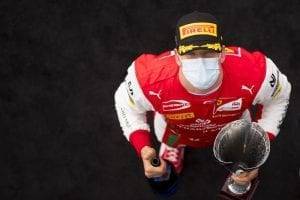