F3 Champion, Dennis Hauger, has graduated into FIA Formula 2 with PREMA Racing, following his successful 2021 season with the team.

Hauger’s fate was sealed when he switched to PREMA, from Hitech, for the 2021 season. He earned nine podiums and four race wins in Barcelona, Austria, Hungary and Zandvoort, and helped teammates, Arthur Leclerc and Olli Caldwell total 377 points, just four behind Championship winners Trident.

Dennis Hauger:
“I’m delighted to continue with PREMA in 2022. We had a good year in 2021 with some amazing teamwork, and I really enjoyed it.”

Being the Champion wasn’t an automatic entry to Formula 2 for the Norwegian. However, the two PREMA seats became available when 2021 Champion, Oscar Piastri and second placed Robert Shwartzman, agreed terms with Alpine and Ferrari respectively, to become their Reserve driver, and Test driver, in the upcoming Formula 1 season.

Hauger jumped into the PREMA seat for post-season testing at the Yas Marina Circuit and impressed his Team Principal, René Rosin, with a P4, and a P3 during the afternoon sessions of Day 2, and Day 3:

“We are delighted to continue the work we started with Dennis last year in F3, and that led to so many great results. Of course, being a rookie is not always straightforward. However, in the official postseason test, Dennis made consistent and impressive progress, and we are looking forward to a positive season together.”

“We are also proud to work with the Red Bull Junior Team again, and hopefully, we will be able to add more chapters to our successful history together.” – Rosin.

Hauger’s potential was already apparent after becoming Italian Formula 4 Champion with Van Amersfoort in 2019, and taking P2 for the Dutch team in the ADAC Formula 4 series.

In the Italian Formula 4 series he won 12 races and totalled 369 points – a dominating 136 points ahead of second place, Gianluca Petecof.

Consistent winning results in his junior karting days also highlight the talent the 18 year old has. Together with the experienced Daruvala in the upcoming 2022 season, it’s possible another trophy or two may be going in PREMA’s direction this year.

Hauger – “I’m extremely happy that they keep believing in me, and I’m looking forward to carrying on the hard work we put in together this season as well.”

Can Hauger follow in his predecessor, Piastri’s, footsteps and become Formula 2 champion in his rookie season? 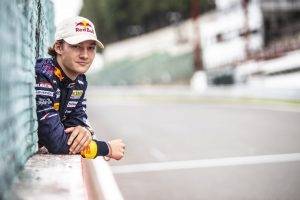