Silverstone has utilised numerous layouts over its long and illustrious history.

In 1948 the Northamptonshire venue used Silverstone’s former airfield runways and perimeter roads. Today, the circuit layout is very different with a new infield section introduced back in 2010.

Ahead of the 1987 season, Silverstone underwent minor changes to the circuit layout. The track introduced the Bridge chicane to help slow the cars down before Woodcote which returned to being a fast right hand turn.

Before 1991, Silverstone carried out a plethora of radical redesigns to the circuit adding a third of a mile to the track. The Magotts, Becketts and Chapel complex were tinkered with alongside Vale being introduced at the entry to Club.

Bridge also received a makeover, the turn was now a stunningly fast right hander sweeping downhill underneath a bridge.

Three years later in 1994 Silverstone changed it’s layout once more reprofiling the Abbey curve into a chicane. This change reduced the entry speed into Bridge but the magic still remained.

Formula 2 first attacked Bridge in 2005 as the series replaced Formula 3000, back when F1’s chief feeder series was titled GP2.

The brand new single seater championship didn’t disappoint in it’s second event at Silverstone in 2006. And Bridge was certainly at the centre of the action.

On Lap 1 of the Sprint Race Adam Carroll pounced on mistake from ART Grand Prix driver Lewis Hamilton. Carroll dove up the inside at Bridge but Hamilton battled back, holding his nerve and keeping ahead of his compatriot.

Later on in that thrilling Sprint Race, Hamilton set up a textbook pass for the lead at Bridge getting ahead of Spaniard Félix Porteiro.

The British driver forced Porteiro to defend at the Abbey chicane before firing up the inside at Bridge. The move was finished off with a stylish cutback at Priory to complete Hamilton’s moment of magic.

Silverstone remained unchanged for the following three years and continued to create great memories in GP2 such as Giorgio Pantano’s double podium in 2008.

Just one year later, the iconic Bridge was used for the final time as Silverstone planned a radical new track layout for 2010.

The new layout, designed to improve overtaking meant Bridge was pushed to the sidelines.

The new configuration bypassed Bridge and the all new arena section is still in use today.

At the present time Bridge is a Wall of Fame used to celebrate the drivers that have raced at Silverstone.

The classic turn hasn’t seen any racing for a number of years however the Abbey chicanes kerb and echoes from the past still remain.

Bridge is now part of the F1 Fan Zone when Formula 1 rolls into town and is an integral part of the fan experience.

What are your thoughts on Bridge and do you have any memories of the turn?

Do you have a favourite Silverstone layout? 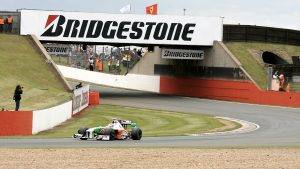