Formula 2 has raced on some magnificent circuits over the years. Whether it be all time classics such as Monza or newer facilities including the Bahrain International Circuit.

Amongst these world class tracks lie epic turns, one of F2s most famous turns is Copse at Silverstone in Britain.

Silverstone has been hosting Formula 1 Grands Prix since F1s inaugural season in 1950. The Northamptonshire venue has also been a mainstay on the FIA F2 calendar since 2005.

The fast right hand turn of Copse is drenched in history, throughout Silverstones various guises Copse has stood the test of time since the circuits inaugural Grand Prix in 1948.

In 1948 Silverstone was 3.664 miles in length making it the longest Silverstone layout to date, almost identical to the circuits modern configuration at 3.660 miles.

The original route utilised two of Silverstone’s former airfield runways coupled with the perimeter road of the site.

Formula 2 first graced the former airfield in 1949, the event was won by British driver Ken Watkins in his BMW 328 in a race that only had four entrants.

By 1952, Copse had replaced Woodcote as the first turn at Silverstone and held that accolade until 2010.

Copse has changed precious little since Silverstone was converted into a racetrack, only minor alterations such as in 1991 and 1994 where the turn was tightened to help slow the cars down.

Copse was redesigned for a third time in 1997 and turned into the ultra quick turn that remains identical today.

Silverstones latest Turn 1, Abbey, along with Luffield take their names from the remains of the nearby Luffield Abbey.

Alongside all of Copse’s magnificent history, the blindingly quick turn has also created some memorable occasions.

The 2006 GP2 champion Lewis Hamilton drew alongside pole-sitter Adam Carroll at the race start and led into Turn 1 at Copse on his way to victory.

Later that weekend, Hamilton produced yet another brilliant pass into the fearsome Copse, the British driver slipped up the inside of Giorgio Pantano at the Safety Car restart.

Just two years later in 2008,Hamilton, who was now a Formula 1 driver pulled off a very impressive overtake at Copse gaining two places at the start at a rain soaked Silverstone.

The McLaren driver stormed into P2 from fourth place at the expense of Kimi Räikkönen and Mark Webber.

In 2010, Silverstone underwent it’s most recent makeover as Bridge and Priory were replaced by the all new Arena section and the reprofiled Abbey. Copse remained unchanged and continued to deliver awe inspiring action.

What are your thoughts on Copse and where does it rank amongst Formula 2s great turns? 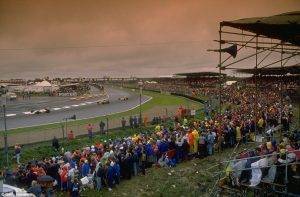