Intercity Istanbul Park had a brief but very successful stint on the GP2 calendar. The 2.439 mile circuit contributed to GP2 from 2005-2011 as the series shadowed Formula 1.

Within Istanbul Park, lies the fearsome Turn 8, a high speed quadruple apex left hander that is the most revered turn on the Turkish circuit. This most challenging of turns is extremely long at 640 metres, a similar length to Sochi Autodroms Turn 3.

Turn 8 is also integral to a good lap time at Istanbul Park due to it’s long radius and high speed.

Long straights closely follow the turn with heavy braking zones into Turns 9 and 12 making the left hander of Turn 8 crucial in race conditions to attack or defend.

Istanbuls Turn 8 may not have an iconic name like Silverstones Copse or Imolas Acque Minerali but can certainly rival those two turns as one of the most famous in Formula 2 folklore.

Intercity Istanbul Park was designed by Hermann Tilke and is certainly one of the Germans greatest hits.

Tilke has since designed the Circuit of the Americas in Texas which features a turn very similar to Istanbuls Turn 8 however the American tracks imitation doesn’t quite capture the mystique of the original.

Istanbul Park first broke onto the world stage in 2005 when the circuit hosted the Turkish Grand Prix. The undercard for that great event included GP2 which continued to delight fans in it’s opening year.

Lewis Hamilton produced a magnificent drive at Istanbul Park finishing second in the Sprint Race after a spin on Lap 2 in 2006.

Hamilton pulled off a flurry of great overtakes into the heavy braking zone at Turn 12. The McLaren protege also drove around outside of iSport International driver Ernesto Viso at the entry of Turn 8 in a very brave move.

After 2011, Istanbul Park dropped off the F1 calendar which meant the brilliant circuit was vacated by GP2 as well.

Over Istanbul Park’s 16 year existence the track layout has stayed identical to it’s original layout from 2005 with Turn 8 being at the heart of Turkeys only FIA grade 1 circuit.

After a nine year wait Istanbul Park returned to the Formula 1 calendar for 2020.

What are your thoughts on Istanbuls Turn 8? Would you like to see Istanbul Park make a comeback to the Formula 2 calendar? 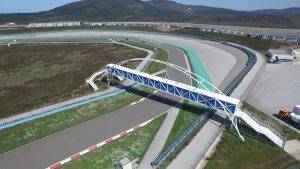