The Circuit De Monaco has become one of the worlds most iconic tracks over it’s illustrious 93 year history.

The 2.074 mile circuit has changed remarkably little since 1929 and much of the original track remains today. The first Monaco Grand Prix was won by Frenchman William Grover-Williams driving a Bugatti Type 35B

Monaco’s penultimate turn La Rascasse has provided numerous memorable moments over the years with the barriers in close proximity on either side.

Monaco has been part of the FIA F2 calendar since the series’ inaugural campaign in 2005 apart from 2020 due to the COVID-19 pandemic.

F2’s visit to Monaco in 2005 was won by British driver Adam Carroll for Super Nova International in what became one of his three wins that season.

Iconic turns such as Massenet, Fairmont Hairpin and Tabac all remain virtually identical to their original designs today.

The circuit is one of the most iconic in Formula 2 due to it’s twisty nature and vast amount of history.

La Rascasse was established in 1973 after the government in Monaco built a municipal swimming pool. This also introduced the swimming pool complex of the circuit which demonstrates the cars changing direction at high speed before slowing down for La Rascasse.

Prior to the introduction of the swimming pool the cars went straight on after Tabac and into the old final turn. A hairpin named Gazomètre which led the drivers back onto the start finish straight.

Gazomètre was replaced by La Rascasse and Monaco’s final turn Antony Noghès which is named after Antony Noghès. He founded the Monaco Grand Prix in 1929 and helped to create the Monte Carlo Rally.

Monaco’s penultimate turn has changed slightly during it’s 49 year history. La Rascasse was left untouched until 2003 before was the entry to the turn was opened up. This allowed for a straighter run into the apex of the turn and a potential overtaking opportunity.

This minor change to the track layout fractionally decreased the lap length from 2.092 miles down to 2.074 miles.

La Rascasse gets it’s name from an old fisherman’s bar which is now a high end restaurant on the inside of the turn.

Liam Lawson snatched the lead from PREMA driver Oscar Piastri at La Rascasse during the second Sprint Race of the weekend in 2021.

Piastri himself benefited at La Rascasse in 2021 fending off Dan Ticktum in a thrilling Feature Race duel.

La Rascasse has become an iconic turn at Monaco creating some memorable moments and a challenge for the drivers.

What are your thoughts on La Rascasse?

Do you have a favourite memory of the turn? 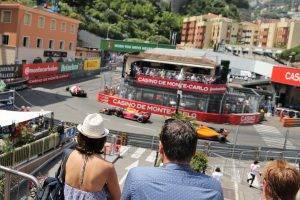