Fast pace and mixed results for DAMS in Imola

Fast pace and mixed results for DAMS in Imola

For all the craziness that Imola weekend has thrown, from delayed practice starts and red flags, to wet weather and drivers crashing out, DAMS were quick all throughout a very frantic weekend in the FIA Formula 2 championship.

Both cars showed excellent pace across all three days, and the team managed to score points in both the Sprint Race and the Feature Race.

On Friday, the weekend started excellently when the Red Bull Junior Ayumu Iwasa clocked in a 1m40.378s in tricky conditions around the circuit – just 0.15s off polesitter Juri Vips. This time meant that the Japanese driver would start second in Sunday’s Feature Race.

Reflecting on the events, Iwasa was quite encouraged by how the weekend unfolded:

“I’m happy with how the weekend went, I think there was potential for more points but we showed great pace as a team. Qualifying was tricky with the conditions, but the car felt really good and I was delighted with P2 and a front-row start on Sunday.”

The circuit’s layout doesn’t give many opportunities to overtake and that hurt the Japanese driver’s progress through the field.

An error at Variante Alta before going wide at the next corner meant his hopes of finishing in the points in the Sprint Race were over.

“I got a bit stuck in the pack on Saturday as it’s difficult to overtake here, so we just missed out on points.”

The Feature Race saw Iwasa in good form as he made most of his P2 starting position. Even though he lost out in the pitstop, the Honda Formula Dream Project driver left Imola on a satisfactory note after taking the best result of his F2 career so far.

“We lost a few places in the pits in the Feature Race as I had to wait for Roy to finish his stop ahead of me in the double stack, but we had good pace throughout to take P5. It could’ve been more but I’m satisfied with my first visit to Imola and looking forward to Barcelona next month.”

Roy Nissany in the other DAMS car had an up and down sort of weekend. His Friday started off great as he qualified an excellent sixth for the Feature Race, his highest qualifying position in F2 yet.

“The car felt great in qualifying, the track was drying so I was happy with our performance.”

Saturday saw a strong start from the Israeli driver as he rocketed into fourth position and hung onto that for the remainder of the Sprint Race.

“On Saturday we had a solid race, I got a brilliant start and towards the end of the race we had very good pace. We were so close to the podium and with one more lap we probably would have got it.”

Another brilliant start saw him take the lead of the race on Sunday. He managed his pace very well throughout the race and was leading following the pitstop phase.

But all the hard work came undone for the DAMS driver when he crashed out at the final corner to end his chance of a maiden series victory.

“My start in the Feature Race was amazing, jumping up five places to take the lead. The team did a perfect pit stop and we were feeling comfortable in the net lead, but I made a small mistake with big consequences and that was the end of our day.

“I’m sorry to the team, they gave me a great car this weekend and hopefully we can bounce back in Barcelona.”

The strong form from the French-based outfit this weekend was very encouraging, and they will be hoping to recreate it once again when Formula 2 goes racing in Barcelona in one month’s time. 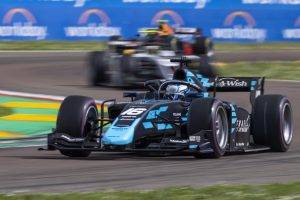