The FIA Formula 3 in-season testing is finally over, with two days of action at Barcelona‘s Circuit de Barcelona-Catalunya wrapping up one of the most compressed testing programs as the grid prepares for the season’s third round in just five days.

It has only been a week since the last time they were out on track for testing in Jerez, in which PREMA Racing’s Arthur Leclerc dominated three out of four sessions from the weekend, whilst his teammate Oliver Bearman took the lead in the final session on Day 2.

Unlike the previous test, Barcelona had warm weather that allowed drivers to learn about their cars under different conditions. In contrast, Jerez provided challenging wet and windy conditions.

MP Motorsport had the most drivers inside the top 10 throughout the weekend in Barcelona. At least three teams managed to maximise their potential with new names topping the leaderboards.

In the two days of testing at Jerez, PREMA Racing was unstoppable as their drivers topped all four sessions from the weekend. Arthur Leclerc made the most out of his red car in a rain-hampered session on Day 1, all while his teammate, Oliver Bearman, set the quickest time overall later that afternoon.

It was impressive coming from Bearman, who has never experienced an F3 car in a full day under the rainy weather. The rookie was delighted to encounter such conditions to prepare for Spielberg and Spa-Francorchamps, which have a history of producing wet races.

Meanwhile, Leclerc continued his dominance in the frantic morning session on Day 2 with three red flags from the Jenzer Motorsport drivers, setting a 1:30.628, marginally better than Carlin driver Zak O’Sullivan, who was only six-tenths of a second slower than him.

Furthermore, the Monegasque became the quickest driver of the Jerez test, dropping an even faster time of 1:29.556 in the premature final session, beating the Feature Race winner Victor Martins of MP Motorsport.

ART’s Juan Manuel Correa has appeared to have a fracture on his left foot ever since the season opener in Bahrain. He feels the pain is tormenting him again, despite assuming it was officially over after a successful 2021 campaign.

As the American’s future became uncertain, former F3 driver Matteo Nannini had to replace him for the in-season test in Jerez, and it’s likely for him to stay with the French team ahead of Imola until he gets better.

Another driver from the 2020 F3 campaign, David Schumacher, stepped up as a late replacement for Ayrton Simmons to fill the last Charouz Racing seat for the test.

Moreover, we’ve gathered everything that went down in Barcelona.

The sun was shining in the weekend’s first session in Barcelona. The top five were almost exclusive to the ART Grand Prix and Trident pairings, with Grégoire Saucy setting the fastest time overall with a 1:32.247 to put himself on top of the leaderboard for the first time.

Van Amersfoort Racing’s Franco Colapinto got beaten to second, despite completing the most mileage in the first-morning run, with 49 laps. The rookie was only 0.115s off the Swiss driver’s time.

The second MP Motorsport driver Alexander Smolyar ended the first morning run in ninth fastest ahead of Matteo Nannini. The Italian made a remarkable comeback after almost two years since his last time driving an F3 car, finishing the session tenth fastest.

MP Motorsport showed great potential in the second successive session of the day as the sunny weather remained. Alexander Smolyar snatched the lead from his teammate, Caio Collet, with a 1:33.342, knocking the Brazillian to second.

The third-year driver, Roman Stan?k, prevented an all-MP top three as he finished third fastest ahead of the last MP Motorsport driver, who managed to hold onto fourth with ART’s Grégoire Saucy in fifth.

The rookie sensation Isack Hadjar was sixth fastest for Hitech Grand Prix ahead of both PREMA drivers, Arthur Leclerc and Jak Crawford, in seventh and eighth fastest, respectively.

After getting beaten to second, Caio Collet took a turn on his teammate, Alexander Smolyar, on the final morning session of the Barcelona in-season testing, with an impressive 1:31.507, which marks the fastest time overall from the weekend.

Franco Colapinto placed his Van Amersfoort Racing in third fastest, entering the top three for the second time in a row as he added another 51 laps to an impressive tally of 103 laps from Day 1.

Isack Hadjar improved on his personal best to finish fourth fastest for Hitech Grand Prix, ahead of Trident’s Roman Stan?k, who became the only driver from the weekend to complete three sessions in the top five.

ART Grand Prix’s Grégoire Saucy completed the session in sixth fastest, ahead of the remaining Trident drivers, Oliver Rasmussen and Zane Maloney, in seventh and eighth.

Matteo Nannini showed another excellent performance in placing the second ART Grand Prix in ninth fastest, ahead of the only PREMA Racing driver inside the top 10, Arthur Leclerc.

The final session from the weekend was quite different from the other sessions, as new names started to approach the top of the leaderboard.

Jenzer Motorsport’s rookie, William Alatalo, sealed the fastest time overall for the first time, while Campos Racing’s Josep Maria Marti in second ahead of the more experienced PREMA Racing’s Arthur Leclerc, who beat Villagomez to fourth in the final minutes of the session.

However, the Van Amersfoort Racing driver managed to end the session with the highest lap count as Leclerc’s teammate, Oliver Bearman, rounded out the top five.

David Schumacher completed the afternoon in sixth fastest for Charouz Racing System, and was the teams best result from this test. The Jenzer Motorsport duo, Frederico Malvestiti and Ido Cohen, finished in seventh and eighth fastest.

The FIA Formula 3 Championship will return to Imola for the second round of action this week on the 22nd of April. 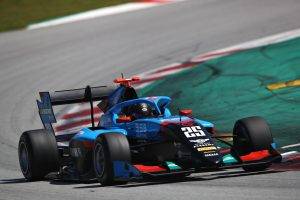