The FIA Formula 3 third round of the season in Barcelona is done and dusted, as Campos Racing’s rookie David Vidales proudly took his maiden F3 win with Victor Martins retaining his lead in the Championship standings after storming to victory in the Feature Race.

Vidales became the hometown hero Spain deserved that weekend in Circuito De Catalunya Barcelona, claiming his first-ever F3 victory at his and the team’s home race, despite being pressurized by Jak Crawford. The American driver had to settle for second, ahead of ART’s Juan Manuel Correa, who fought hard on his return to the series.

Martins remained unstoppable, only finishing outside the top five once out of all sessions from the weekend, as his ART slowed down on the track, forcing him to retire early from the Sprint Race.

The Frenchman put the disappointment of early retirement in yesterday’s Sprint Race well and truly behind him. Martins seized the right opportunity to secure his fourth F3 win in the Feature Race, taking the lead from polesitter Roman Stanek as soon as the lights went out.

Unlike the previous test, Barcelona had warm weather that allowed drivers to learn about their cars under different conditions. In contrast, Jerez provided challenging wet and windy conditions.

Moreover, MP Motorsport had the most drivers inside the top 10 throughout the weekend in Barcelona, and at least three teams maximized their potential with new names topping the leaderboards.

Arriving off the back of the two in-season tests at Jerez and Barcelona, the ever-changing weather proved a significant challenge for the 30-strong grid. Following the heavy overnight downpours, Trident conquered the conditions in Qualifying, as Zane Maloney claimed a front-row lockout for the Italian team ahead of his teammate Roman Stanek.

Franco Colapinto made the most of the warm and sunny weather on Saturday by taking his and Van Amersfoort Racing’s first-ever victory from the reversed pole position. He passed MP Motorsport’s Caio Collet over the final two laps of the Sprint Race, as the latter was becoming stuck behind Hitech’s Isack Hadjar. Their fellow Alpine and Red Bull juniors completed the podium, with Victor Martins edging over Jak Crawford at the finish line.

After further rain fell overnight, the track was proved slick for the Feature Race. Roman Stanek held his nerve out to cement a home race victory for Trident, as Hitech’s Isack Hadjar finished third, earning his second podium of the season. At the same time, Jak Crawford completed the race in second to make it two straight victories for PREMA Racing.

Following the Feature Race in Bahrain and subsequent testing in Jerez, Juan Manuel Correa felt unbearable pain in his left foot, which cost him to miss the first two European Le Mans Series outings with the PREMA Racing team as well as the FIA Formula 3 second round of the season.

However, the American-Ecuadorian driver returned to the series for the first time in 44 days with a podium which makes him look forward to Silverstone in the hope of maximizing his full potential after missing Round 2 in Imola, Italy, as last year’s F2 and F3 driver Matteo Nannini stepped up for him.

He said: “I am very much looking forward to Silverstone. I want it to come soon. Not too soon because I still need a few weeks to make sure the foot is 100% ready for the hard brake bump. But I think at Silverstone, the disadvantage will go away that I have and will be able to get back on track with the season and the Championship.

“It’s also going to be a very difficult track. Silverstone is challenging. I’m excited to drive it F3. I’m looking forward to see what we can do there, and I really hope we can get a good number of points and start getting closer to the top three in the Championship.”

The title fight continues to heat up with Martins holding on to his lead in the Drivers’ Championship by the narrowest of margins – countback, tied with Leclerc on 36 points. The Frenchman will want to go one better than his second place in Barcelona last year, but the momentum could be with PREMA’s Jak Crawford, who sits in fourth following his double podium.

Trident’s Oliver Rasmussen achieved his first points in F3 and will be on the hunt for more while expecting Zane Maloney to be in the fight after the 18-year-old claimed his maiden pole position in only his second round in the category. Also, look out for Charouz Racing System, as Lirim Zendeli returns in place of David Schumacher for this event.

Moreover, we’ve gathered everything that went down in Barcelona.

The sun was shining in the weekend’s first session in the familiar surroundings of Barcelona with cooler early morning temperatures, as Victor Martins set the fastest time overall with a 1:32.796 for the second round in a row ahead of title rival Arthur Leclerc in second fastest for PREMA Racing.

Both title contenders were nip-and-tuck on track with less than a tenth between them. The PREMA Racing driver went quickest, only for Championship leader Victor Martins to go 0.076s quicker.

Imola’s Feature Race winner Roman Stanek got beaten to third in his Trident, just over half a second behind the leading time, as Jak Crawford completed the session in fourth in the second PREMA Racing car ahead of Van Amersfoort Racing’s rookie, who’s also the Sprint Race winner from Imola, Franco Colapinto in fifth.

The boy from Barbados, Zane Maloney, made it to sixth fastest, as fellow rookies Oliver Bearman made it three PREMAs inside the top seven with Hitech’s Kaylen Frederick in ninth.

The only MP Motorsport driver inside the top ten from the session Alexander Smolyar ended the first morning run in ninth fastest ahead of Campos Racing’s David Vidales, who rounded out the top 10 at the team’s home weekend.

Despite an early error in the qualifying session, Trident’s Roman Stanek impressively secured his first-ever F3 pole position in the final seconds of the frantic qualifying session in Barcelona, beating the championship leader Victor Martins to second with a 1:33.516.

The first day of the weekend in the Circuit de Barcelona-Catalunya seemed to be a perfect start for the Czech driver, as he showed good pace in both sessions. Stanek completed the Free Practice inside the top three, and later that Friday, he also earned his first-ever F3 pole position.

Though Martins was confident about taking the pole after setting the pace in Free Practice, he had to settle for second when Stanek unexpectedly stormed into the top spot with an even quicker lap time.

ART Grand Prix’s Alexander  Smolyar completed the top three from the session ahead of Hitech’s rookie Isack Hadjar in fourth, as PREMA Racing’s Arthur Leclerc rounded out the top five.

Leclerc’s teammate Oliver Bearman made it to sixth ahead of the pacesetter Caio Collet in seventh for the second MP Motorsport car after Smolyar set the 1m33s benchmark halfway through Qualifying.

Further down, Kaylen Frederick ended up in eighth fastest as Jak Crawford placed third PREMA Racing car in ninth, ahead of Juan Manuel Correa, who entered the top 10 after returning to the series.

Campos Racing’s rookie David Vidales brilliantly takes his and the team’s first-ever Formula 3 victory on their home soil, dominating the Sprint Race from reversed pole position, despite getting pressurized by his fellow rookie Jak Crawford in a closely-fought battle halfway through the 20-laps-long session.

The headstrong Vidales held his nerve out to take his first-ever victory in the category with 1.2 seconds clear of Crawford, who settled in second ahead of MP Motorsport’s Caio Collet, who took the final spot from the podium.

The temperature kept rising in Barcelona as the battle heated up for the final podium spot as ART’s Juan Manuel Correa fought hard on his return to the series with a competitive performance in battling out MP Motorsport’s Caio Collet and PREMA Racing’s Arthur Leclerc for third.

Despite his outstanding performance in the battle for third, Correa ended up in fifth after his tires began to wear out. Collet and Leclerc immediately passed the American driver to continue their rise-up order.

Alexander Smolyar made up four places to finish sixth in the second MP Motorsport car ahead of Hitech’s rookie Kaylen Frederick in seventh as tomorrow’s polesitter Roman Stanek placed his Trident in the eighth.

Championship leader Victor Martins once again put a commanding performance to secure his second victory of the season, taking the lead from Polesitter Roman Stanek from the opening corner of the Feature Race, remarkably controlling the pace even with two Safety Car restarts.

Stanek put up a strong defence to resist the pressure from Hitech’s Isack Hadjar throughout the race to claim second ahead of the rookie in third. Moreover, Alexander Smolyar brought home another solid haul of points for MP Motorsport in fourth, as the PREMA Racing’s pairings, Oliver Bearman and Jak Crawford, ended the weekend in Barcelona in fifth and sixth, individually.

In the closing stages, Juan Manuel Correa pulled out an aggressive move to retake the final points-paying position in P10, which leaves Arthur Leclerc at a disadvantage. The PREMA Racing driver finished 11th after the duel with Correa’s teammate Gregoire Saucy, and he received a post-race penalty that put him in P14.

The FIA Formula 3 will return to action this week as the Championship heads to Silverstone from July 1-3. 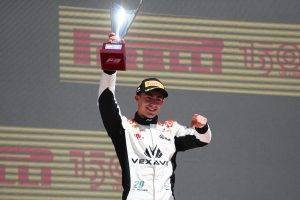