The FIA Formula 3 in-season test went underway in Jerez, and we’re finally seeing some improvements on the second year drivers and 18 rookies after the season opener.

While compatriot Victor Martins secured his long-awaited victory in the Feature Race, prevailing over PREMA Racing’s Arthur Leclerc, who fought his way to second from 13th position.

The victory allowed Martins to lead the Drivers’ championship with 25 points as Arthur Leclerc is only one point behind the ART Grand Prix driver.

Leclerc’s teammate Oliver Bearman is third with 17 points ahead of the ART Grand Prix pairing, Gregoire Saucy and Juan Manuel Correa, as the pack rounded out the top five from the standings.

With three of the ART drivers inside the top five, the French team holds the championship standings with 54 points, ahead of PREMA Racing, who sits second with 47 points.

Due to a concerning health issue, Jonny Edgar will not be competing in the FIA Formula 3 championship until he gets better as Trident signs Oliver Rasmussen to step in for the stricken British driver.

While everyone in the team wishes Edgar the best recovery possible, Rasmussen is eager to start his second F3 campaign with the Italian team, ahead of further testing in Barcelona and Round 2 at Imola.

Frederico Malvestiti returned to test with Jenzer Motorsport as he made his second appearance with the Swiss outfit after driving for the team in 2020.

Further down, we’ve summarised everything you need to know in Jerez.

Despite the wet and windy Jerez morning in the session opener, Arthur Leclerc made the most out of his PREMA as he set the fastest time with a 1:40.202, a good time enough to beat second-placed Trident’s Roman Stanek.

Before the Monegasque took over the leaderboard, Hitech’s Isack Hadjar was the first to set the baseline time with a 1:46.213, leading the majority of the rain-hampered session.

The Frenchman didn’t last long after his successful lap time, beating his own time with an impressive 1:42.047 as he went to the gravel and brought the only red flag into the three-hour session.

Franco Colapinto impressively ended the session in third fastest for Van Amersfoort Racing, ahead of the ART Grand Prix duo, Gregoire Saucy and Victor Martins. They rounded out the top five in fourth and fifth fastest, only separated by three-tenths of a second.

Hadjar ended up in ninth fastest after the unfortunate event that happened to the Hitech driver earlier, as Trident’s Zane Maloney rounded out the top 10.

PREMA Racing continued to dominate on Day 1 as Oliver Bearman completed the afternoon session fastest with an impressive 1:33.099 as the time edged below 1:35s for the first time in Jerez.

The rookie was pleased to maximise the car under wet conditions as he believes that the experience could help him perform better at Spa-Francorchamps and Spielberg later this year.

Campos Racing’s Josep Maria Marti was the next fastest driver as he finished second with an excellent 0.666s gap to Bearman ahead of fellow rookie Zane Maloney in third for Trident.

Gregoire Saucy placed his ART in ninth ahead of the two Campos Racing drivers, David Vidales and Hunter Yeany, in tenth and eleventh fastest, respectively.

Arthur Leclerc continued to dominate as he finished fastest in both morning and afternoon stints, setting the quickest time overall at testing.

Leclerc set an even quicker time with a 1:30.634 in the opening stint to beat Carlin’s Zak O’Sullivan as MP Motorsport’s Caio Collet completed the top three, ahead of his former teammate, Victor Martins, in just less than a tenth off the leader.

Oliver Bearman did his best to finish in the eighth fastest ahead of Hitech’s rookie Kaylan Frederick in ninth, with Reece Ushijima rounding out the top 10 for Van Amersfoort Racing.

Leclerc remained unbeatable during the in-season test as he proved himself in the final session of the weekend, setting another quickest time with a 1:29.556

Victor Martins reached out to second fastest after completing all of the sessions inside the top 5, with only 0.014s off Leclerc’s time.

Two tenths back were the previous Sprint Race winner, Isack Hadjar, who completed the top three for Hitech Grand Prix, ahead of Franco Colapinto, who claimed fourth with only a 0.003 gap from Hadjar.

Rasmussen ended the session in fifth as he continued to adjust to the F3 machinery with Trident after switching from HWA Racelab.

Even though the session had to end prematurely as Juan Manuel Correa brought a red flag in the final seconds, Kaylen Frederick finished sixth in the second ART car as Trident’s rookie Zane Maloney improved on his personal best in seventh.

Meanwhile, Bearman sticked to eighth in both sessions on Day 2 ahead of ART Grand Prix’s Gregoire Saucy in ninth as Zak O’Sullivan leaves a good impression for Trident in the final position from the top 10.

The FIA Formula 3 championship will be back for another in-season test at Barcelona, just ten days before the second round of the season at Imola. 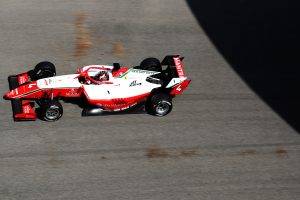