After a year of missing the action in Silverstone, the FIA Formula 3 was finally back for its fourth round of the 2022 season with 15 drivers without experience around the 5.8km track, including the two winners, Isack Hadjar and Arthur Leclerc, who conquered the unpredictable British weather.

The two champions only got their learnings from one of the most challenging circuits from the calendars across the 45-minute Practice session, in which they finished in fifth and 17th, respectively.

Leclerc wasn’t able to maximize his potential throughout the session but proceeded to claim second in Qualifying alongside polesitter Zak O’Sullivan on the front row for the first time, as Hadjar finished ninth fastest.

The Frenchman brilliantly stormed off into the lead in the dying minutes of the Sprint Race to take the victory out of his main title rival Victor Martin’s hand, who was leading the race ever since the lights went out as reverse polesitter Reece Ushijima found himself under pressure in the opening sectors, which allowed him to take his second Formula 3 win on Hitech Grand Prix’s home soil.

Moreover, Leclerc had an unbothered Feature Race as he put PREMA Racing on top of the podium for the first time this year, securing his first win of the year ahead of hometown favourites Zak O’Sullivan and his teammate Oliver Bearman.

The two drivers behind the Monegasque were only separated by just 0.051s across the line, as there was a fierce battle in fighting for the third position. Despite a good qualifying, Zane Maloney was squeezed out by Bearman, and he had to fall down the order to 11th, handing the third-place finish to the Briton.

This time the podiums are filled with the hometown heroes, with three drivers racing under the British flag. Zak O’Sullivan completed the race highest in second amongst compatriots Oliver Bearman and Reece Ushijima.

After recovering from a dreadful Crohn’s disease that required him to take a break from racing for a while and miss the last four races, Jonny Edgar returned to the series with Trident. The 18-year-old came in time for the Championship round in his hometown, where he will be able to compete in front of a crowd of supporters on a track he knows well.

Even though Oliver Rasmussen would no longer be a part of the team as a result of Edgar’s comeback, the team thanked the Danish driver for his hard work in the last four races and wished him the best for his career ahead as Team Manager Giacomo Ricci welcomed Edgar back into the team.

Moreover, Zdenek Chovanec rejoined the Charouz Racing System to replace Lirim Zendelli in the car that Ayrton Simmons and David Schumacher previously owned. Filip Ugran also stepped up for Alexander Smolyar’s absence for MP Motorsport, which he had to miss over visa issues.

Martins remained strong as the Championship leader with 77 points, as Leclerc is now just six points behind the ART Grand Prix driver. Hadjar proved that he is still the highest placed rookie in third with 68 points ahead of Trident’s Roman Stanek in fourth, just one point away from Crawford in fifth. His teammate Oliver Bearman is sitting in sixth after earning his biggest points in Silverstone, with compatriot Zak O’Sullivan in seventh for Carlin.

Further down, The MP Motorsport pairings Caio Collet and Alexander Smolyar slip to eighth and ninth, individually, as Van Amersfoort Racing’s Franco Colapinto rounded out the top 10 from the Drivers’ standings.

Find out everything that went down in Silverstone in just one click.

Despite the unpredictable British weather, practice for underway with conditions decidedly overcast at Silverstone as MP Motorsport’s Kush Maini leads the session opener for the first time. His teammate Caio Collet was only 0.35s shy from the Indian’s driver time.

Collet set the pace for the final two minutes of the first practice session. Maini overtook him with a time of 1:44.661, moving the Brazilian driver into second place ahead of Kaylen Frederick of Hitech in third fastest.

The top five were almost exclusive to the MP Motorsport and Hitech pairings until Roman Stanek placed his Trident in fourth. Hitech’s rookie Isack Hadjar rounded out the top five, only 0.006s away from Stanek.

Championship leader Victor Martins finished the 45-minute session in sixth place for ART Grand Prix, ahead of Zak O’Sullivan of Carlin in seventh and Zane Maloney and Jonny Edgar of Trident in eighth and ninth, respectively.

Both Campos Racing drivers, Josep Maria Marti, completed the top ten from the session, slightly ahead of his teammate Hunter Yeany in 11th with a 0.078s gap between them.

Zak O’Sullivan pushed it to the limit in a thrilling last-minute battle to secure his and Carlin’s first-ever pole position in the FIA Formula 3 championship on their home soil, beating the title contender Arthur Leclerc second only 0.027s shy from the Briton’s time.

Leclerc was leading the session for a while to take the pole home for PREMA Racing until O’Sullivan set a slightly quicker time than the Monegasque driver with a 1:44.597 in the remaining three and half minutes from the session, which allowed him to seal pole position at his home circuit.

Kaylen Frederick made it to seventh fastest for Hitech, as he showed excellent pace in finishing third for the first time in Free Practice. Trident’s Roman Stanek ended up in eighth, ahead of the second Hitech driver Isack Hadjar in the eighth.

The Frenchman seized the right opportunity to take five places from 14th in a last-minute battle, giving him the benefit of starting fourth from the reversed grid for the Sprint Race. Lastly, the pacesetter from the session opener Kush Maini rounded out the top 10 for MP Motorsport in his third-best Qualifying so far.

Isack Hadjar held his nerve until the dying minutes of the race to beat the long-time race leader Victor Martins in the penultimate lap of the race to claim his second Formula 3 win at Hitech Grand Prix’s home race from fourth.

Determined to make amends after an unwanted result in Friday’s qualifying session, Martins wasted no time snatching the lead from the Van Amersfoort Racing’s rookie Reece Ushijima by slamming into him right away from the second sector. The Japanese-British driver found himself under pressure in the opening sectors, which allowed Martins to get ahead of him.

However, after holding on to the lead since the five lights went out, Martins was forced to settle for second after sustaining pressure from Ushijima in the closing laps, as compatriot Hadjar collected his second Formula 3 victory in his rookie season.

Ushijima’s sterling effort paid off when he finished third to seal his maiden Formula 3 podium on his adopted home, ahead of MP Motorsport’s Kush Maini, who finished fourth. At the same time, Kaylen Frederick took his best result to-date in fifth in the second Hitech car.

Arthur Leclerc scored his and PREMA’s first win of the season after beating polesitter Zak O’Sullivan in a hectic Feature Race in Silverstone, as it could’ve been a one-two finish with his teammate Oliver Bearman in third.

Home favourites Zak O’Sullivan and Ollie Bearman were separated by just 0.051s across the line in the Carlin driver’s favour after a last-lap scrap for the runner-up position.

As it happened, Bearman made contact with Zane Maloney into Luffield to take third as the Bajan driver spun and had to fall into the order. Just as the safety car was deployed because Van Amersfoort Racing’s Franco Colapinto crashed into the wall, Leclerc attempted to take over O’Sullivan’s place.

He failed many times over until he renewed his challenge to dive into the inside of the Briton through Woodcote and never looked back, resulting in an unbothered race.

Moreover, the Carlin driver held on to second as Bearman snatched third from Collet on the race’s penultimate lap, beating the Brazilian fourth, as Saturday’s Sprint Race winner Isak Hadjar rounded out the top five.

Championship leader Victor Martins battled from 11th to finish seventh for ART Grand Prix ahead of Trident’s Jonny Edgar in eighth from 14th, who just returned to the series. David Vidales was ninth for Campos Racing, as Van Amersfoort Racing’s Reece Ushijima took the final points-paying position in tenth.

The 30-strong grid will return to action this weekend at the Red Bull Ring in Spielberg for the season’s fifth-round starting from 8-10 July. Last time around the iconic circuit, the reigning champion Dennis Hauger was the first to collect the trophy from the weekend, followed by David Schumacher and Frederik Vesti as the series awaited new winners. 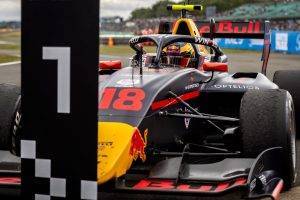