After a thrilling round in Spa-Francorchamps with two new winners, there’s barely time to pause for the FIA Formula 3 as the championship continues to the penultimate round of the title-deciding triple-header in Zandvoort.

Last week, the grid saw Oliver Bearman as the Sprint Race winner for the first time, crossing the line first around the Belgian track with his PREMA Racing. He secured a victory and a podium on the same weekend, which gave him an easy promotion to second in the championship standings, only one point shy from the current championship leader Isack Hadjar, as 106 plays 105.

Bearman started in fifth, but things escalated quickly on the first lap of the race. ART’s Juan Manuel Correa swept off the reverse polesitter Zak O’Sullivan to second, and he continued to drop the order. The Briton comfortably led the race, even after the restart and ended up 1.3s clear at the chequered flag to take his maiden Victory ahead of Trident’s Roman Stanek and MP Motorsport’s Alexander Smolyar.

Jonny Edgar was supposed to take second, but his five-second penalty dropped him down to fourth ahead of Arthur Leclerc, as the top five was almost exclusive to the Trident and PREMA pairings.

Meanwhile, Zane Maloney returned bounced back to become the only Bajan driver to win a Formula 3 race from second in the Feature Race after a horrifying crash with Oliver Goethe in Saturday’s Sprint Race. The Trident driver showed up in the highest place on the podium ahead of his teammate Roman Stanek and Oliver Bearman, who continued to finish inside the top three.

Oliver Goethe also made it to fourth, with Jonny Edgar consistently staying inside the top five, as the polesitter Caio Collet dropped down to fifth. After the race, Maloney said: “Obviously very happy to get the first win in F3. Who would have thought that would happen after yesterday, so amazing job to the team – this win is only for them.

“Honestly, they’ve done an amazing job, they didn’t have any sleep, and I was able to go out there and win for them. So big celebrations tonight, and thank you for everyone’s support and also in Barbados as well for all the support.”

Moreover, the Dutch circuit is well known for its notorious banked corners, which will provide a unique challenge for the 30-strong grid this weekend. With only ten points separating first to fifth, the battle will get more intense as the champion title is all to play for.

David Schumacher will return to the FIA Formula 3 championship with Charouz Racing system to step in for Christian Mansell in the season’s final two rounds in Zandvoort and Monza.

At the same time, Sebastian Montoya will make his debut in the series with Campos Racing to replace Oliver Goethe due to the collision from the previous round in Belgium.

Last time out in Zandvoort

Last year, the FIA Formula 3 was relatively new to the notorious banked corners of Zandvoort. Arthur Leclerc and Victor Martins will surely await the ninth round of the season to repeat their glorious wins in the circuit, with the best chance of winning the championship title.

As a start, Leclerc conquered the first race of the weekend to claim his second Formula 3 win over Logan Sargeant with a defensive display. The Monegasque driver stormed off into the lead from third, and Sargeant couldn’t hold him to stay behind his Charouz Racing as reverse polesitter Amaury Cordeel got involved in a collision with Alexander Smolyar.

Ayumu Iwasa settled in the final podium spot as the former Hitech driver played out a patient race to finish ahead of Jak Crawford and Caio Collet. Leclerc held on to first, setting a comfortable gap to Sargeant with a

39:02.034, who later told his team that he gave everything to conquer the challenge around one of the world’s oldest circuits.

His main title rival, Victor Martins, put on a spectacular drive to claim his first-ever Formula 3 win from fifth to beat the long-time race leader Clement Novalak and ART Grand Prix’s Frederik Vesti. Novalak had to settle for second when Martins swept around outside his compatriot down the main straight to steal his lead of the race, as he withstood the pressure from Novalak.

Lastly, the FIA Formula 3 reigning champion Dennis Hauger continued to dominate in the Feature Race, proving his fourth win to put one hand on the title. He led the race with a comfortable gap of more than five seconds ahead of Clement Novalak and Alexander Smolyar. The Norwegian will look forward to repeating the success in the circuit he knows well in Formula 2 machinery for the first time this weekend.

Three names were written on the streets of Zandvoort, as the 30-strong grid will look forward to leaving the Netherlands as the winner of the race, or as the new Championship leader, with only 10 points separating the top five. The FIA Formula 3 will return to action around the Dutch track from 2-4 September. 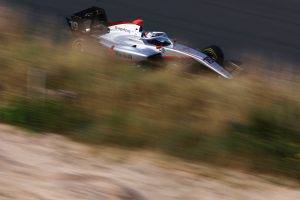