First Day Back at School for Roy Nissany

First Day Back at School for Roy Nissany

The upcoming FIA Formula 2 Season feels like the first day back at school for DAMS driver, Roy Nissany. I chatted with him over the first race weekend of the 2022 season, in Bahrain.

“I’m feeling great! And excited for the new season to start.

“It feels like the first day of school but in the same school. It’s already a very familiar environment for me, this track, this hotel room.

“You know the same place you get your rental car, the same place you go for lunch at the track, you already know the procedures. It reduces the level of stress. The excitement stays the same. The stress of the first year is not there anymore. And surely it will help the performance.”

Looking forward to the new season ahead, Roy went into detail on how the December testing in Abu Dhabi compared to last week’s testing in Bahrain.

“If we look at Abu Dhabi testing at the end of last year, we see the same trends of being around the top 10 and having a strong race pace. There are some small margins in qualifying pace that we know about and we know about from last season as well. We cannot really improve the components of the car, we can just set it up differently.”

The final testing session in Bahrain was cancelled due to a sandstorm. I asked Roy what affects it had on himself and the team:

“It’s frustrating at first. We had two new sets of tyres waiting. Standing there, shining, and looking at us, just waiting to be used. It’s frustrating because we didn’t show what we could do. In the mental aspect, the psychological aspect, we didn’t do a bad job even in terms of positioning, without using these tyres. Which means we have something in our pocket that obviously in a race can be used. So it’s definitely a positive point.”

With Roy being an integral member of the Williams Driver Academy, he explained the differences between the Formula 1 car of the Williams, and how much of what he absorbs and reflects with the Grove based team, benefits his Formula 2 DAMS team:

“Compare an F1 test to an F2 test. If we think that an F1 car has over 500 sensors, in F2 we have maybe 50 tops. F1 offers 10 times more Information of what this [DAMS] car is capable of having, and what our minds are capable of understanding and learning, and improving. It’s part of the game, which makes it interesting, because F2 is a bit more gambling. A bit more theory based. It’s more speculating. And sometimes you’re right and sometimes you’re wrong. And sometimes you have to be even smarter because it’s based more on creativity.”

Having an obvious passion for the technical aspects of any kind of machinery, Roy feels his technical ability is a great bonus.

“I love this world of engineering. Even outside of motorsport I love complex coffee machines and to understand how they work and how they extract the best espresso. And once understanding this, if my mind is working in this way, I understand the F1 research and theories, and I’m trying to give the ideas of some of the physics that maybe in F1 they found something special and I can translate it into F2. This experience gives a huge value.”

“A driver has to be fast. If he’s not fast enough he’s not a good driver. A technical mind doesn’t compensate for the main thing. If I’m lacking 3/10s in the race from where I want to be, I’m asking questions to myself; Before blaming any car, any set up, red flags, conditions, whatever, I need to gain these 3/10s to get where I want.”

Recently team principal, François Sicard, indicated DAMS would possibly need another season until they could return to their championship winning ways.

“I can relate very much to what Françios says because the team two years ago were not in the best place considering where they were. So team wise and team aspect, this time it’s needed. We have a rookie onboard. It’s hard to make the big step. Nevertheless it doesn’t mean we don’t have huge potential straight away.

“What usually happens when new owners come in, you present a two year plan, and my window is obviously a bit shifted from that plan. If I look from my point-of-view, I’m happy with the team where it is, and seeing the dedication they have for me and for the team itself. It’s unbelievable, from their last win, they are ready to win again and are fully motivated.”

“I really like the guy. I think he’s a great driver from what I’ve seen. We drove together in F3 Asia for a few months so it’s good to have a good driver in the team. He needs to start picking up the F2 conversation. He’s getting it. He’s getting there. He’s already fluent in the information which is a lot for someone new. We throw a bunch of information at him and expect him to know it, and perform, and he does. I think even better than what I did when I arrived in F2 in 2018. We have good potential together.”

“Every driver wants to be faster than his team mate, but you also don’t want your team mate to be too far behind, and I want him to donate to the team as much as he can without overtaking me.” 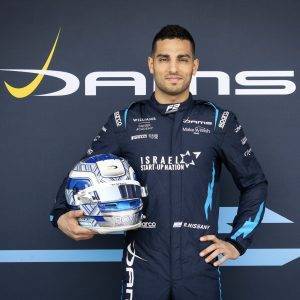