InsideF2 caught up with Luca Ghiotto recently and we discussed where he got his passion for motorsport and when he got to experience racing.

Luca has been back home in the northeast of Italy through this global pandemic with his family, now with lockdown restrictions are slowly lifting in Italy he has been able to get out and training as he plans to get back to race fitness.

As Luca mentioned to us in our previous piece “Home While Away” and “Speed and Sounds“, he has to really ramp up his preparationsÂ ahead of what will be an incredible season where he plans to race in two separate championships.

While chatting we took it was back from the present situation to discuss the early days and his first experiences behind a wheel.

Where did it start for you with four-wheels?

My dad was racing at the time, I went to the local track together and I ask him to have a go on a mini kart. It wasn’t for long though and it was actually a big gap until I got to drive something again after that because as a family we focused on my father’s career.

What do you remember of it?

I don’t have a very clear memory but I was maybe eight years old at the time, I liked it. It wasn’t then until I was about twelve years old that I got to go again in on a bigger kart and then I would say it all began and we really took things seriously.

I see your father has the radio control cars business, was that the start of your passion for driving?

Well because my father always liked the manufacturing and racing of RC cars (wrc-racing.com) it was something we always did. He had been doing that for a very long time since the early 90s, I enjoy it, I think its quite fun.

I’ve raced them in the past may be back in 2012, but maybe because I’m a racing driver I prefer to be involved in designing them rather than racing them.

Could you see yourself doing some designing and engineering in future?

Maybe, I’m good at 3D design so I work on the design office and help with the design for the parts.

While I’m racing and hopefully for a long time yet. It’s a good way to learn how a car works, the RC cars work the same way as any car to scale; it’s useful for me to know all those details, I find it useful.

What would you have been doing if you didn’t become a racing driver?

Motorsport has been a passion in our family for a long time. Not only my father but I also have my uncle who is a big motorsport fan and he has raced with my father.

Actually, I also have a cousin too who is a big motorsport fan, he actually bought and owns Leclerc’s F2 car from 2017, so there’s no way I would have been far from this even if I wasn’t a racing driver.

How was your first race?

I remember it was on a famous track here in Italy, I think in 2007 and it was in a challenge called the Autumn trophy. It was a regional race, there were some fast drivers.

I went out and didn’t even finish it, I didn’t know how to behave with the other drivers on track and I don’t think I lasted even one lap fighting with the others until I was off.

Do you remember your first victory?

Oh yes‚I remember that one quite well, it was in another karting track in Italy near Parma.

The track isn’t open anymore and the reason I remember it so well was due to that race being the last ever race there before it closed so being a winner on such a historic kart track was a good memory for me.

Well, I think the biggest thing I have learnt over the years is that karting is a good way to learn but it’s not what defines you as a driver. Just because you are fast in karting it doesn’t mean your fast in cars.

There are guys like Verstappen and Leclerc who had been fast from a young age in karting, however, you can have a driver like myself that for example who didn’t do anything in karts because there are other factors that affect performance like being tall or too heavy for karts.

For me the lesson’s learnt at that level is that it teaches you how to behave in close racing and how to fight.

If you could give yourself one bit of advice on your first day on track what would it be?

I think, the thing I would tell myself looking into the future, is that you have a natural speed but consistency is very important.

Sometimes winning a single race in motorsport isn’t the most important thing and you need to be on the points every single time if you want to win titles.

If there are young drivers who, I’m sure will be reading this, it is important advice. I’m not saying its more important than winning as that’s what we all want but for sure consistency is just as important in a championship.

Any advice for followers who are thinking of getting into racing even if it’s just as a hobby?

It depends on what level you are as there is lots of advice to give but the main thing is to enjoy it.

I have learnt that you have to enjoy it! If you have pressure and stress to deliver results it doesn’t help.

Even if that’s getting stressed when it’s going just once a year to a track for fun, relax, enjoy it and have fun.

I know 99% of the time when you are less stressed you will be quicker.

It’s a challenging time for many people at the moment, do you have a message for insideF2 followers and race fans?

Well, first of all, I hope they are all safe, healthy, and respecting the rules of lockdown. Even though it’s a small thing to do it will help us all in this situation. I look forward to getting back to normal soon and being on track. 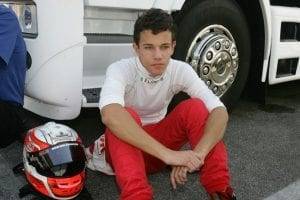