InsideF2 caught up with Nikita Mazepin and we discussed where it started with his passion for motorsport and racing.

Nikita Mazepin has been back home in Russia through this global pandemic but he was kind enough to take a bit of time out from his training and University studies to talk about how he got started with four wheels.

Nikita enjoyed a successful karting career, finishing as runner-up in the 2014 CIK-FIA World Championship KF category. He subsequently graduated to single-seaters and through the junior championships to where we see him today in FIA Formula 2 looking to continue his progress on the #RoadtoF1. But how did it all start for the talented Russian?

Thank you for taking the time to speak to our followers here at insideF2.com, how have you been over the last couple of months?

I am good thank you, James, I have been spending a lot of time working on my studies with University.

Let’s talk a little about how you started on four wheels and where it all began for you. What was your first memory of driving a car or vehicle?

Before jumping into my first go-kart my family lived in the countryside and my dad bought a little jeep, one of those little plastic electric cars. Now they have rubber wheels but back then they had those plastic ones and they were making this horrible noise when you started spinning them on asphalt.

I can visually remember this because I recall not being able to reach the pedals and my father put something on the throttle so I could steer, and the thing would just drive for me.

How old were you at the time and was there always a passion for cars?

I was about four or five, my family have always had a philosophy that children should study first and go to school and then after that have a little free time that was sport-related. In school, I was doing sports gymnastics and then I started karting.

So you had some vehicles from an early age?

Yes for sure, When I was younger I had two quad bikes and every time I come back from school, as we lived a bit outside the city, I used to go riding two or three hours each day.

I remember that I would tune the engines to make them much faster. Later on, when I was ten-years-old my father got me an ATV and I remember it was very powerful for my age.

I am not sure if I could even reach the pedals. I managed to ride it well and I can even still fit on it now comfortably.

How did you start driving and karting?

Well, The reason I started karting was through my dad’s friends-son who was also my friend back then. His father had a two-floor go-karting centre and the track was based on first and second floors. It was fun and honestly, I haven’t seen a track like this before.

Actually, the guy who was running it was the father of Pavel Gusakov who was the trainer of Daniil Kvyat and when I started the lessons we started to take it more seriously and then later on Pavel became my trainer when Danny moved away.

Do you remember your first victory?

While doing indoor karting I won quite a lot but I don’t remember the first actual win that clearly to be honest.

I do remember winning a Russian cup, which was a big race and I won unexpectedly to be honest, in a place called Ust-Labink close to Krasnodar I remember that quite well.

I think that the best training for driving is driving, so that’s one, also that mindset is really important too.

Setting yourself goals and dreams plus showing dedication is the key to any success.

Bol’shoye Spasibo to Nikita and Hitech, If you enjoyed this please give us a cheeky share on twitter and tag us in your comments.
_ 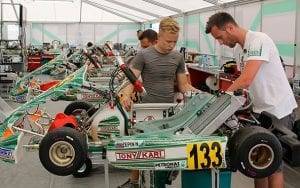