Qualifying in 16th place on the grid meant FIA Formula 2 Charouz driver, Enzo Fittipaldi, had his work cut out for him. With the heart of a lion he gave it his all to get the best from the car and himself.

Having a great start off the grid, the Brazilian was forced off the circuit to drop the places he’d gained.

“The start was really strong, we had a really good launch. I went from P16 to around P12/P11 and I got forced off, and I lost a lot of positions back to like 18th or 17th. From then on it was recovering. We had good pace and some good overtakes, and we finished P11. I’m quite happy with the result. First race back after my big accident in Jeddah. I feel really good and really confident.”

He spent the rest of the the first Sprint Race of the year catching packs, overtaking, and fighting until the very last lap for the chance of points.

“We were really close to getting a P10. I think one more lap and I would have passed Doohan. But in general it was a really good race.”

Although he didn’t succeed, and on paper it looks like a loss, what was noticeable on track was Fittipaldi’s hunger and determination to get ahead and stay ahead.

“I had a good battle with Roy. We had a bit more pace towards the final stages of the race. I overtook him and tried to go on the inside and he locked up. I gave him he switch-back.

“With having soft compounds the deg was really high and obviously you had to know when to push and when not to push and you could easily hit the cliff, and it’s very difficult to recover. I think I managed that pretty well. I struggled a bit in the middle of the race with the pace. But then I could analyse and see what I was struggling with in the car and adjust the tools I have inside the car. I was able to improve within the race. The last five laps were pretty quick and I was catching up quite quickly. We had some great battles and some overtakes.”

Already the first race of the season behind him, the young Charouz driver was looking ahead to Sunday’s Feature Race.

“I’m starting again in P16. It’s a much longer race, so strategy’s a big thing here. You know here in Bahrain you can start in P20 and finish in the top five so I think it all depends of Safety Cars and things like this. The plan is to look ahead and move forward and hopefully get a points finish.

“I’m just happy with the [Sprint] race and we know what we have to improve on for the Feature Race, so I’m just really looking forward it.” 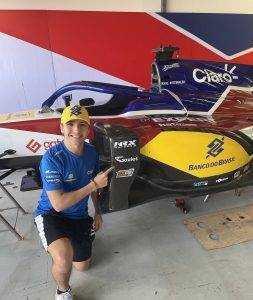