Enzo Fittipaldi expressed his delight after getting an unexpected result in Qualifying’s final moments in Silverstone, as the Brazilian driver took a top ten qualifying slot for the second time in 2022.

Fittipaldi believes that he and Charouz Racing System are far from being done, even though he has scored points in six of the past seven races and currently sits eighth in the standings with 50 points.

Imola has proven the most successful weekend; despite only scoring points in the Feature Race with a P2 finish, the amount scored (18) still beats the combined 15 points from Monaco’s two races.

He was the first driver to lead the field as Qualifying got underway with the clouds shading most parts of the circuit.

Carlin’s Logan Sargeant dominated the session to claim his maiden pole position, while Fittipaldi’s lap allowed him to start on the reverse grid front row alongside PREMA Racing’s Jehan Daruvala.

In an exclusive interview with InsideF2 about his Qualifying, the 20-year-old said: “It was good. I mean, we just had a few minutes left, and I was P21 without a lap time.

“With the tailwind, it was very tricky. I kept having big snaps… big moments in Turn 1

“I had one lap to do it, and we were able to get a good, decent lap time in. And to put the car… the Charouz Racing System… up in the top 10, [I’m] just very happy about it.

“It’s one of our best qualifyings this season, just behind Monaco. So you know, each race weekend, we’re improving, we’ll start on the front row tomorrow, and then we’ll be in a good position for the future race to fight for some points.”

It has been 68 days since his maiden and only Formula 2 podium so far in Imola. The upcoming Sprint Race represents the best chance since that race for Fittipaldi to rejoin the podium ceremony, and he’s certainly looking to add another podium to his name.

“We have a really good shot. If we get everything sorted, we prepare well tonight and, just all the details, put everything together tomorrow,” Fittipaldi added.

“My driving… my start… [they] will have to be mega, and then just go for it and have a good race pace. There’s no pit stop from green to checkered, and we’ll see.”

Looking at the relatively low temperatures in Silverstone with the chance of rain that rises to 85% on Saturday, Fittipaldi remains confident about the possible weather changes.

Many drivers worked hard to generate tyre temperature in both sessions from the first day of the weekend.

However, the Charouz driver doesn’t seem to be worried, as he looks forward to the challenge from Silverstone.

He continued by saying: “It’s interesting because there’s a chance of rain. It’s a pretty high chance, but I’m looking forward to it, and we’ll see how it goes.

“If you’re in the lead, the race’s first three or four laps are critical. You have to push, obviously not destroy the tires, but push a lot to try and break the DRS and make a gap. That’s critical, but we have a very competitive field.

“That’s going to be an action-packed race tomorrow. Rain looks very probable, so that will be a big thing that will come into play.

“Obviously will change things up, but I love the rain, I love the dry, I love every condition, so I’m ready for anything.” 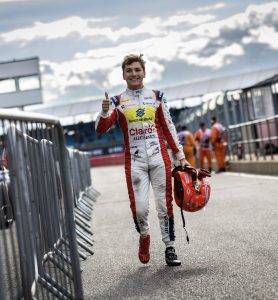